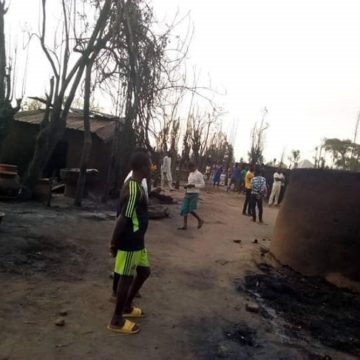 Over 100 houses and two lives were consumed by fire incident, on Tuesday evening, in the Bandawa Community of Karim Lamido Local Government Area of Taraba State.

Hon Binga Taninga, the commissioner for humanitarians affairs Taraba State who confirmed the incident to our correspondent, regretted the development as it happened during the critical period of raining season.

The commissioner said that government delegations were already sent to ascertain the level of destruction for immediate action to ease the plight of the people.

Tribune Online reports that the incident was due to the heavy windstorm that destroyed many other residence in some areas in the state.

Mr Mathias Manyi, President Bandawa Community Development Association, while reacting to the incident, described it as unfortunate, mostly as at the time the villagers were set for the farming season.

He expressed fear of impending hunger and other related hardship on the people if immediate action is not taking by both federal and state government.

In spite of the huge investment in the water sector by the government and international organisations, water scarcity has grown to become a perennial nightmare for residents of Abeokuta, the Ogun State capital. This report x-rays the lives and experiences of residents in getting clean, potable and affordable water amidst the surge of COVID-19 cases in the state.Two die as fire consumes community in Taraba

The Lagos-Ibadan railway was inaugurated recently for a full paid operation by the Nigerian Railway Corporation after about a year of free test-run. Our reporter joined the train to and fro Lagos from Ibadan and tells his experience in this report…Two die as fire consumes community in Taraba

Democracy Day: Buhari’s speeches expose him as not serving Nigerians’…