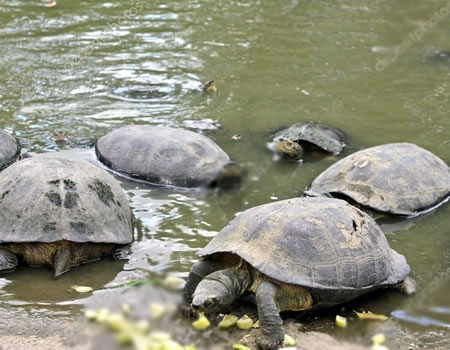 In humans, going just minutes without oxygen—such as during a heart attack or stroke—can cause devastating damage to the heart. Conversely, freshwater turtles hibernate for months at the bottom of frozen lakes and awake with no heart damage in the spring.

Researchers at Aarhus University in Denmark and the University of Cambridge in the U.K. are looking at these turtles to understand the mechanisms that protect them from heart damage.

The research team hypothesised that much of the protection comes from the mitochondria. They will present their findings at the American Physiological Society’s Physiological Bioenergetics: Mitochondria from Bench to Bedside conference in San Diego.

In mammals, much of the damage that occurs in the heart after oxygen deprivation is caused by the return of oxygen to the tissue. “When oxygen returns, toxic reactive oxygen species (ROS) are produced in the mitochondria,” said Amanda Bundgård, a PhD candidate and lead author on the study.

Turtles have been suggested as a good model animal to study ageing because they live remarkably long lives with relatively low age-related deterioration .

“We investigated whether turtles may avoid oxidative damage in the heart after winter hibernation by specifically inhibiting the mitochondrial protein complex I, which is responsible for the production of ROS,” Bundgård explained.

“We found that, although complex inhibition was a potent means to prevent ROS in the heart, this was apparently not the turtle’s main strategy to prevent oxidative stress after the absence of oxygen.

“Instead, turtles seem to rely on a general suppression of mitochondrial function, whose mechanisms we still need to understand, but that may fit well with the already low metabolic rates of turtles compared to mammals.”

The research team found that reducing the content of mitochondria in the turtle heart during prolonged anoxia may prevent ROS production upon reoxygenation and protect against oxidative damage.

“It is possible that the remarkable ability of freshwater turtles to survive oxygen deficiency for months may in part rely on some mitochondrial shutdown, which is something we may one day be able to exploit to protect the sensitive mammalian heart from oxidative damage following a heart attack.”

“Whether this mitochondrial inhibition happens naturally in the turtle during anoxia has not actually been investigated directly and is our next step in this study,” Bundgård said.

2017 Hajj: Pilgrims converge on Muna ahead of Arafat