Trump says he has ordered ‘substantial increase’ of Iran sanctions

US President Donald Trump said on Wednesday he had ordered his Treasury Secretary to “substantially increase sanctions” imposed on Iran, in the wake of an attack on Saudi oil facilities that some US officials have blamed on Tehran.

He did not give details on the move and Tehran has denied it was behind the attack, which initially knocked out half of Saudi Arabia’s oil production and sent oil prices sharply higher.

Yemen’s Houthi movement, an ally of Iran battling a Western-backed, Saudi-led coalition for more than four years, has taken responsibility for the attack, a claim that Riyadh has dismissed as an attempt to cover up for Tehran’s involvement. 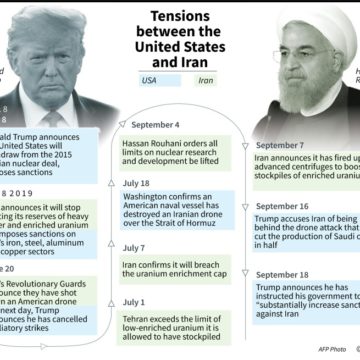 A US official told Reuters the strikes originated in southwestern Iran. Three officials said they involved cruise missiles and drones, indicating a higher degree of complexity and sophistication than initially thought.

The White House and the Treasury Department did not immediately respond to requests to comment on what the sanctions could be.

But a former US Treasury official said Washington could target the Islamic Republic with so-called secondary sanctions that could hamper the efforts of European allies still party to a nuclear deal with Iran that Trump pulled out of last year.

“France has been floating the 15 billion credit line and there’s no way I could see the Trump administration letting that happen now,” the former official said.

In early September, France proposed offering Iran about $15 billion in credit lines until year-end if Tehran comes fully back into compliance with the 2015 nuclear deal, but the whole arrangement would hinge on US approval.

“Though it’s presently unclear what these sanctions will target if they are a response to Iranian escalation in the region they will need to go after any entity involved in the recent strike. Full stop,” Behnam Ben Taleblu, a senior fellow at think-tank FDD said.

Trump said he is not looking to meet Iranian President Hassan Rouhani during a UN event in New York this month. Rouhani and his foreign minister may not attend the UN General Assembly at all unless US visas are issued in the coming hours, Iranian state media reported Wednesday.

O’Brien, who currently serves as the special presidential envoy for hostage affairs at the State Department, has a long history in Republican foreign policy circles.

Also, Saudi Arabia’s deputy defense minister on Wednesday thanked the United States for confronting Iran in an “unprecedented way” and for defending its regional allies against what he called unprovoked attacks.

“President (Donald) Trump’s Administration has confronted the Iranian regime’s and terrorist organizations aggression in an unprecedented way we in KSA thank the President for his stance, we will continue to stand with the USA against the forces of evil and senseless aggression,” Saudi vice minister of defense, Prince Khalid bin Salman, tweeted.