Trouble in NIPC as workers shut down Headquarters over welfare

•Calls for sack of the Executive Secretary 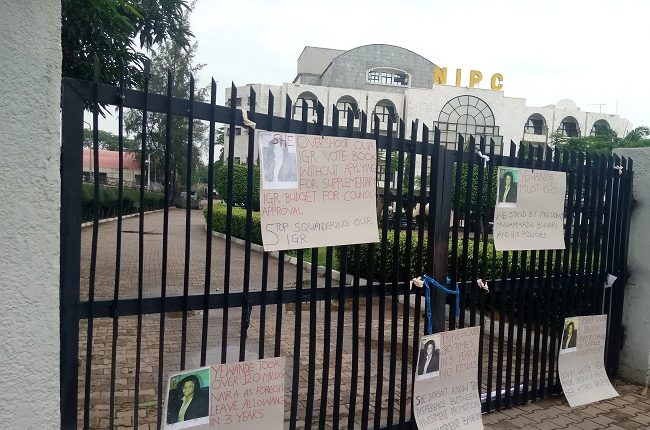 The staff of the Nigerian Investment Promotion Commission (NIPC) have shut down business and administrative work in its entirety at the Headquarters in Abuja.

The gate of NIPC has been barricaded since Thursday, 9th of July 2020, the workers under the umbrella of Union have refused entrance into the complex of any staff.

Tribune Online visited the office and met the main entrance block by cars of the Union, while the gate was locked.

Speaking to Tribune under the condition of anonymity, one of the many staff’s gathered expressed dissatisfaction over the current leadership of the NIPC and passed a vote of no confidence on the Executive Secretary, Yewande Sadiku over what he called continues maltreatment of workers while on the other hand feeding fat.

On the gate of NIPC, there were placards accusing Sadiku of travelling outside the country over 80 times and paying to herself over N120 million as travelled allowance. They (placards) noted that the trips did not yield investment results.

Also speaking to the media, Chairman of the NIPC Staff union, Comrade Yusuf Mustapha had stated that the “Union has been embroiled in a struggle with the Executive Secretary and Management to address pressing staff welfare matters and institutional failures.

“However, every civil attempt on our part has been met with a lack of decorum, dishonesty and total disregard on the part of the Executive Secretary and her team. It is on record avenues of civil negotiations and reconciliations has been exhausted by the Union Exco.

“The NIPC in its 20years of existence has never been so broken, demoralised and polarised. As a result, the Union under my leadership has taken decisive action to save our dear commission from this dire situation.

“Today Thursday 9th of July, 2020 the Union has initiated industrial action. I wish to seize this opportunity to sincerely thank members for your show of extreme patience and decorum in these trying times. I will as always be relying on your support to ensure we salvage what is left of our darling NIPC” Yusuf stated.

In a statement made available to the Media by NIPC spokesman Emeka Offor, who denied the allegation stating that the “Management wishes to put on record, that it has always made staff welfare and development a priority.

“Major welfare improvements were initiated by Management without being prompted, to stimulate productivity and ensure staff job satisfaction.

“The improvements include the introduction of a Productivity Allowance that rewards staff when budget targets are met, a Post Service Benefit Scheme to provide for those who retire or leave after many years of service, a Staff Housing Loan Scheme that can help with homeownership, a Group Life Insurance Policy that will support families of any staff we lose, and many others. These improvements are in addition to the regular payment of staff salaries by the Federal Government”.

Furthermore, the statement noted that “the evidence of Management’s commitment is an increase in the expenditure on staff welfare from 5.91% in 2016 to 45.45% of the IGR in 2020.

“Despite the disruptions to work schedules due to COVID-19 and only a partial resumption of work by all government agencies from May, Management has been faithfully implementing the terms of an agreement reached with the Union in late February.

“The approval of the NIPC Governing Council was secured on 24 June 2020 for the final items. As required by government policies for allowances created by the Governing Council, final clearance from the National Salaries, Incomes and Wages Commission (NSIWC) is being vigorously pursued.

“It is important to note that a member of the Governing Council obtained an exparte Order on 19 December 2019, stopping the Commission from spending its IGR, which is the source of funding for most of its activities. While the Order lasted, NIPC was unable to pay for all the welfare items which are funded from IGR.

“It was disconnected for non-payment of electricity bills and was unable to pay for diesel to power generators and to pay the salaries of outsourced service providers (security guards, cleaners, gardeners and others)” the statement explained.