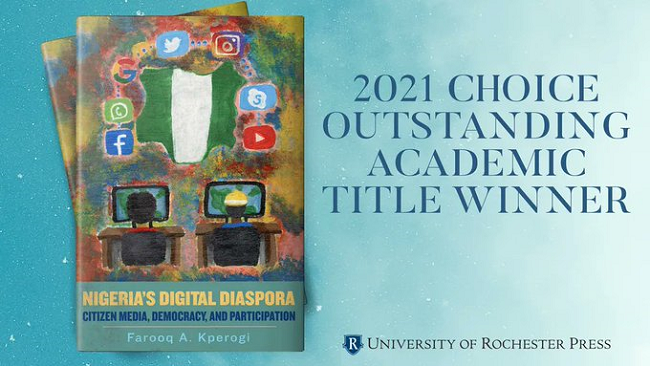 A book written by US based academic and columnist with the Nigerian Tribune, Farooq A. Kperogi, titled ‘Nigeria’s Digital Diaspora’ has won the 2021 Choice Outstanding Academic Title.

The book is published by the University of Rochester Press.

The book, Nigeria’s Digital Diaspora, according to a reviewer, “chronicles the emergence and transformation of Nigeria’s diasporic citizen journalism from the margins to the mainstream of the country’s journalistic landscape.”

Every year in the December issue, in print and online, Choice publishes a list of Outstanding Academic Titles that were reviewed during the previous calendar year.

This list reflects the best in scholarly titles reviewed by Choice and brings with it the extraordinary recognition of the academic library community.

The selective list contains approximately 10 per cent of some 6,000 works reviewed in Choice each year.

The list was known as Outstanding Academic Books until 2000.