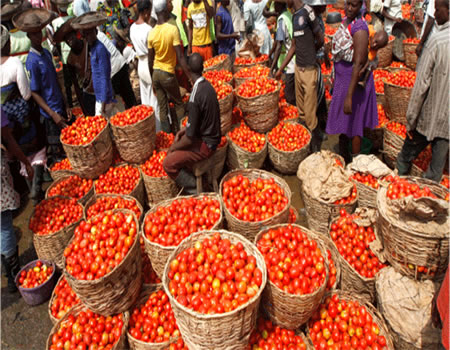 South-West Tomato Growers Association of Nigeria on Monday assured the nation that high cost of the commodity would soon be over as the farmers are approaching the glut period.

The group’s president, Mr Bamidele Ajani said this in an interview with the News Agency of Nigeria (NAN) on Monday in Ibadan.

The tomato is the edible, often red, berry of the plant Solanum Lycopersicum, commonly known as a tomato plant. The species originated in western South America and Central America.

Ajani however, added that the farmers also believed that the cost would reduce because tomatoes grown from the North were being harvested.

He attributed the rising cost of the commodity to hike of transportation from the North as well as lack of Good Agricultural Practice (GAP) by some farmers.

Ajani also said that the Northern states grew more tomatoes than those in the South, pointing out that cost of transportation had a great impact on the commodity’s high cost.

He said that lack of GAP could also lead to low yield and eventual high cost of the produce.

According to him, the increasing industrial need of tomatoes by tomato processing plants in the country is also putting pressure on the price of tomatoes.

“Another one is the difference between the planting season of the North and South Nigeria, the Southern part planting season starts February/March while Northern planting starts May/June, we do have a glut and scarce period.

“The price is supposed to be lower soon because we are approaching the glut period,” he said.

The President said that the COVID-19 pandemic had impacted negatively on tomato production as the lockdown started at a time when preparations of farmland for the planting season commenced.

According to him, COVID-19 prevented farmers’ access to funding as all financial institutions, government agencies and major stakeholders were also affected by the lockdown.

“All collaboration we use to get from government/stakeholders practically stopped.

“In fact, this year agricultural yield/production may turn out low unless the government takes proactive and decisive steps toward boosting agriculture production.

“The governments as a matter of urgency should ease lockdowns, law enforcement agencies should comply with the government’s directives that exempted farmers/farm produce from lockdown restrictions.

“Farmers need to be provided with adequate facilities, farmlands around river banks/dams should be cultivated using an irrigation system, all farmers should return to the farm in earnest,” he said.

FG to partner Brazil on tractor supply to farmers