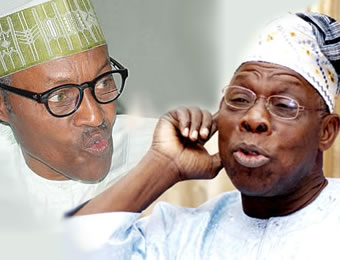 For any close watcher of the mood of the Nigerian public over the past several months, the real surprise about the Federal Government’s reaction to former President Olusegun Obasanjo’s address to the Consultative Dialogue of Nigeria’s socio-cultural and political organisations held in Abuja between September 9-10, is the ferocity of the Federal Government’s riposte and the length to which its media aides went in trying to rebut specific statements in the address. This is because, all things considered, there is really nothing in the former president’s speech that members of the public have not been expressing, whether privately or across various social media platforms. If, in fact, anything was special about the address, titled “Moving Nigeria away from tipping over,” it was the occasion, the status of the speaker, and the overall frankness with which he spoke.

The part of the former president’s address that seems to have stung the Federal Government is the reference to Nigeria as “a failed and badly divided state.” For a better appreciation, that portion of the address is worth quoting in extenso: “Today, Nigeria is fast drifting to a failed and badly divided state. Economically, our country is becoming a basket case and poverty capital of the world, and socially, we are firming up as an unwholesome and insecure country. And these manifestations are the products of recent mismanagement of diversity and the socio-economic development of our country. Old fault lines that were disappearing have opened up in greater fissures and with drums of hatred, disintegration and separation and accompanying choruses being heard loud and clear almost everywhere.”

This grim prognosis notwithstanding, the former president was clear about whose side he was on: the side of those who want Nigeria to remain united and strong, and in this he did not mince words: “… let me say that we must remind those who are beating the drums of disintegration and singing choruses of bitterness, anger and separation that even if Nigeria is broken up, the separated parts will still be neighbours. And they will have to find accommodation as neighbours or they will be ever at war.”

If the former president needed any confirmation that he was not alone in the opinions he was expressing, it came in the form of support from eminent statesmen and, with the notable exception of the Arewa Consultative Forum (ACF), different socio-cultural groups across the country. For example, and no doubt referring to the statement by the Senior Special Assistant on Media and Publicity to the President, Garba Shehu, in which he, Shehu, described Obasanjo as “Nigeria’s divider-in-chief,” Afenifere spokesperson, Yinka Odumakin, stated: “You can say anything about Obasanjo but you can’t accuse him of dividing Nigerians the way this government has been setting herdsmen against farmers, North against South, or Muslims against Christians.” Similarly, the National Publicity Secretary of Ohanaeze Ndigbo, Uche Achi-Okpaga, defended Obasanjo against the accusations of being divisive, pointing out that “Obasanjo brought the best brains irrespective of where they were coming from,” in contrast to President Buhari who appears to have allotted “choice positions to his kinsmen.”

In separate interventions, both Nobel laureate Wole Soyinka and former Foreign Affairs Minister Bolaji Akinyemi agreed with Obasanjo’s diagnosis. For Soyinka, who incidentally cannot be counted among Obasanjo’s friends, “We are close to extinction as a viable comity of peoples, supposedly bound together under an equitable set of protocols of co-habitation, capable of producing its own means of existence, and devoid of a culture of sectarian privilege and will to dominate.” For his part, Professor Akinyemi urged President Buhari not to succumb to the temptation to reject criticism of his administration out of hand, as, on balance, such could not be said to be lacking in merit. Specifically, Akinyemi called on the president to “revisit the 2014 National Conference Report and use some of its recommendations to disperse the dark clouds” looming over the country.

If the criticism of the Buhari administration was cogent and precise, its response has been muddled, if not tone deaf. For example, Senior Special Assistant on Media and Publicity Garba Shehu’s eulogizing of Buhari for having “liberalised the investment climate and market access by achieving reforms that have placed the country in the list (sic) of the world’s top reforming economies” suggests that either Mr. Shehu does not live in Nigeria, or is otherwise completely cut off from everyday reality. At any rate, Mr. Shehu’s fictitious portrait is at odds with the reaction by the Special Adviser on Media and Publicity to the President, Mr. Femi Adesina, who did not dispute Obasanjo’s warning that Nigeria is “badly divided,” but only insisted that the division in fact predated the Buhari administration. Cold comfort.

It goes without saying that former president Obasanjo and those who have sided with him in his dispute with the Federal Government are well within their rights to criticize the government and hold it accountable. When President Buhari was in the opposition, he never held back in his criticism of whoever was in power; his administration’s accustomed irritability at any criticism of it is not only undemocratic, it is deeply illiberal. Instead of going after those who are trying to make it put its money where its mouth is, the Buhari administration should heed wise counsel and listen to what members of the public are saying. The general perception is that this administration has failed woefully in its promise to build a just, economically buoyant, and equitable nation. It should listen to those who are pointing out this obvious truth, not hurl sophomoric diatribes at them.