The inherent dangers in hawking 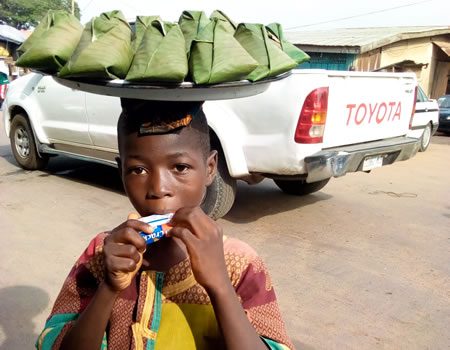 HAWKING is one of the most common forms of child labour in Nigeria, yet it’s been overlooked. In fact, it has already become part of the normal activities of our modern day society. It is more rampant among the girl child and sadly, often results in the involuntary recruitment of many prostitutes and teenage mothers due to their high vulnerability to emotional and physical abuse.

According to a report by the Nigeria’s National Bureau of Statistics and UNICEF, more than half of 79 million children between the ages of five and 17 are put to work, including in hazardous conditions. And, according to the most recent statement by the International Labour Organization (ILO), at least 43 per cent of Nigerian children are trapped in various forced labour despite international conventions banning it.

There have been lot of arguments on whether hawking should be banned or modernised. Some view it as an opportunity that should be encouraged and modernised due to its economic benefits, especially in tackling idleness and of reducing the rate of unemployment. Some even suggest the need to bring innovative thinking into the system by giving the hawkers the opportunity to run shops and by specifying streets that hawking can be allowed, especially in the cities. This however only considers adults while children are the focus of concern.

Take a look at workshops; carpentry, tailoring or welding, mechanics, nearly all of them have a fixed young lady that sells food to them. Most of these young women get vulnerable to abuses; this is why I am always surprised when Gender Based Violence (GBV) advocates overlook hawking, even when it is obviously a major part of the problem.

It is without doubt that hawking activities have many visible negative effects on the children including but not limited to, depriving them of school opportunities, forcing them to acquire immoral values and behaviours, exposing them to violence, physical, emotional and mental harm. It also traps them in intergenerational cycles of poverty.

Hawking among children should, therefore, be completely banned by making provision for alternatives to their mothers; they should equip mothers with skills on establishing viable businesses and on various businesses that could be done at home. This would undoubtedly create a sustainable means of earning a living for mothers and in return, save the children.

Our plight in Ogbomoso South

First batch of vaccines and time to look ahead with hope

Ramadan in a pandemic

A reminder to Islamic preachers

Are there education idols?

Why would anyone think of scrapping local governments?