The high and low points of Ekiti election 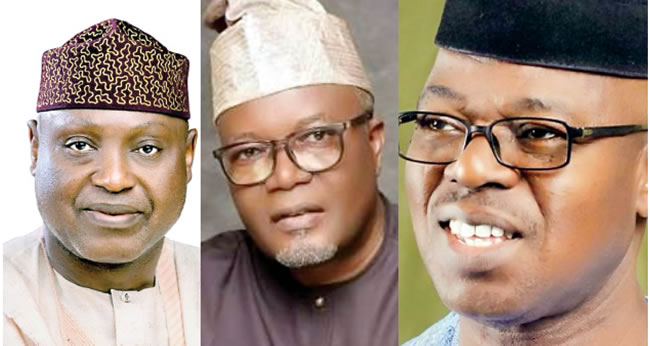 ‘YOMI AYELESO examines the high and low points of the governorship election held in Ekiti State on June 18, 2022, as well as the implications on future elections.

The Ekiti State govenorship election has been won and lost but not without some intrigues and intricacies which were instrumental in swaying voters and determining the firal results decalred by the Independent National electoral Commission (INEC).

In the final results as announced by the Chief Returning Officer and Vice Chancellor of University of Ibadan, Professor KayodeAdebowale, Oyebanji polled 187,057 votes to defeat his two closest rivals ; Social Democratic Party candidate, Chief Segun Oni who scored 82,211 votes and the  candidate of the People’s Democratic Party (PDP) BisiKolawole who garnered 67, 457 votes. The APC candidate also won in 15 local government areas, with the PDP candidate winning in the remaining one council area of the state which is his own LGA.

The outcome of the poll meant the APC has produced the unprecedented in the state by breaking the succession jinx with the back-to-back victories recorded. With the governor-elect scoring 57 percent of the total votes cast, no doubt he represented the popular choice of the people of Ekiti but not without some basic issues which played out. Though in the build-up to election, the two major opposition parties, PDP and SDP had promised to put up a fight but not enough to cause any serious upset due to the APC’s deep-rooted strategies, resources, visible structures across the 177 wards, 16 local government areas and the incumbency factor. The party has elected councilors across the state, 26 House of Assembly members, commissioners, two senators and six House of Representatives; all these were instrumental to the overwhelming victory of the APC candidate.

The APC’s campaign strategy centredaround continuity. The party had driven conversation around the sustenance of the legacies of the outgoing administration of DrFayemi. The argument had been that Ekiti was unable to prosper economically as a result of unstable polity with attendant policy changes in the past.The party also leveraged on the credentials of its candidate who was said to have played significant role in the struggle for the creation of Ekiti State when he(Oyebanji) served as secretary of the State Creation Committee. Aside this,Oyebanji is also floating homeboy advantage having lived most part of his years within the state.

Part of the factors that earned APC victory was the manner the party handled the post governorship primary crises. For instance, the party ensured that some popular aspirants and political heavy weights who lost out in the January APC primaries were allowed to retain their positions at the National assembly. Senator Opeyemi Bamidele who is chairman Southern Senators Forum was given return ticket of the party unopposed. Also, the chairman of House Committee on FERMA, Femi Bamisile was made to win his return ticket to the House of Representatives. The APC poached the opposition camp by winning some key figures into its fold.The entire structure of the Zenith Labour Party (ZLP) was collapsed for Oyebanji while the Deputy Governorship candidate and members of the Executive Council members of the Action Democratic Party (ADP) also joined Oyebanji’s campaign trail.

What appeared to be the master stroke for APC was the emergence of a former Lagos State governor and national leader of the party, Bola Tinubu as presidential candidate for the 2023 elections. The decision of Governor Fayemi to drop his ambition at the APC convention for Tinubu changed the dynamics of the governorship election as the presidential candidate mobilized both human and financial resources towards the success of the APC candidate in Ekiti. Tinubu had fencing mending meetings with aggrieved APC leaders in the state including leadership of the South West Agenda for Asiwaju (SWAGA 2023) who had dissociated themselves from ruling party’s campaigns and activities leading to the poll. The gracing of the APC grand finale rally with about 14 governors, including National chairman, AbdullahiAdamu few days to the election boosted the chances of the ruling party.

In the PDP,  the results of the governorship election was a mere confirmation of the lingering crisis within the party due to what many analysts have described as the high-handedness and dictatorial tendencies of the former governor, AyodeleFayose. Since the end of the govenorship primaries in January, the party failed to make any significant moves that could guarantee victory for its candidate in the June 18 poll ; it is like a party destined to lose scandalously considering events in the build-up to the election.For instance, the handling of the just concluded legislative primaries of the PDP in the state for the 2023 elections was in fact what actually laid the party to rest in relation with the gubernatorial poll. Aside Senator BiodunOlujimi who got her return ticket unopposed after so much intervention by leaders, the rest national and state assembly seats were solely determined by Fayose without recourse to other leaders of the party. This development did not go down well with many leaders and they in turn stayed away from preparation towards the election judging from results from units and local government areas in the state.

About three weeks to the election, it was gathered that the PDP’s National Working Committee sent an undercover team to the state to get feelers and stand of the party as regards to the election, the result of the investigation changed the mind of the NWC and subsequently ‘abandoned’ the Ekiti election. This is demonstrated in the absence of the leaders including the presidential candidate of the PDP, AtikuAbubakar from the state to mobilize and galvanized support for the PDP candidate unlike the APC. From the records, Ekiti state remained the first time in recent years that the PDP would failed to hold any significant rally or campaign for its governorship candidate, despite setting up a 61-member National campaign committee, a development which confirmed the clear division and crisis in the party for the Ekiti election.A staunch member of the PDP and spokesman of Fayose ,LereOlayinka after the election on Sunday released a statement which perhaps confirmed the division in the party especially as it relates with the governorship election.”I salute the courage and doggedness of our leader, Ayo Fayose, and pray that God will continue to uphold him. Posterity will sure judge him rightly. I thank all those who stood by us and showed genuine love despite the blackmail from left, right and center. To the conspirators in Abuja, Southwest Nigeria and Ekiti, we are now on the ground together and it is only God that knows who will rise first,” he said.

The SDP candidate who joined the party in February after losing the PDP primary, even without known structures and membership base, has proven his state wide popularity for coming second ahead of PDP, but not enough to deliver victory for his party a Structures and financial resources have critical role to play in a statewide election;this was missing in the case of SDP.  However, the emergence of Tinubu as the presidential candidate of the APC completely changed the game for the SDP candidate. It was gathered that leaders of SWAGA impressed it on Oni to use the SDP platform for the election, in case Tinubu did not win the APC presidential primary; he would use the platform as his second option. The pro-Tinubu group mobilised support for SDP but the intervention of Tinubu in Ekiti during his meeting with leaders of the group changed the dynamics at the last-minute.

The Situation Room of the Civil Society Organization (CSOs) has disclosed that financial inducement of voters marred the Ekiti election on Saturday. The observer group in an interim statement released and signed by the convener, Ene Obi after the poll on Saturday noted that voters were offered between N4,500 to 10,000 by agents of political parties across the 16 local government areas.According to the CSOs situation room, “ Situation Room received reports of widespread vote buying by political party agents across the 16 Local Government Areas of the State. In many instances, voters were induced with money ranging from N4,500 to N10,000 by asking them to flag completed ballot papers as proof of voting in the specified manner in what they term “See and Buy”. Situation Room strongly condemns this blatant violation of the electoral law.”

The candidate of the African Democratic Congress (ADC) Dr Wole Oluyede alleged cases of vote-buying, compromise on the part of INEC officials and indiscriminate arrest of his people. The medical practitioner said this after voting at Igele Arokun ward 3 unit 006 in IkereEkiti, Ikere local government area of Ekiti State.

Can Adelabu reenact Ladoja’s era with Accord Party?

PDP’s loss of Ekiti and implications for Osun