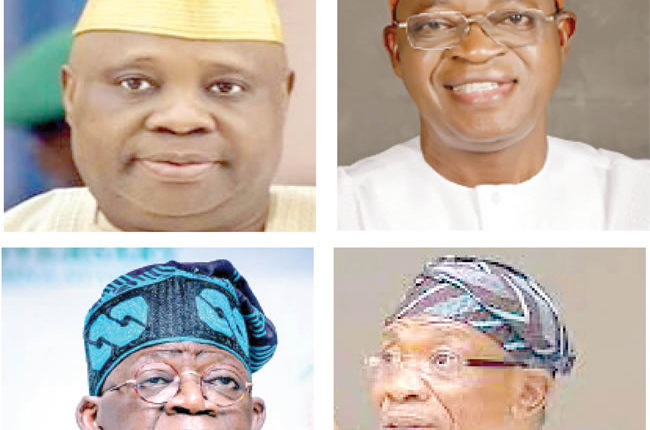 As the countdown to the governorship poll of July 16, 2022 in Osun State begins, ADEOLU ADEYEMO writes on the gale of defections in the leading political parties and if there is prospect of value addition to the benefitting party

With the battle for the soul of Ekiti State won and lost on June 18, 2022 in a governorship poll, the next point of call for major political gladiators is Osun State.  Come July 16, voters in the state are expected to troop out to exercise their right to determine who governs the state for another four years. It is expected to be a titanic contest, in view of a number of factors, including the determination of incumbent Governor Adegboyega Oyetola to secure a second term in office. It is also an opportunity for his party, the All Progressives congress (APC), to consolidate its control of the state, given the fact that the presidential candidate of the party, Chief Bola Tinubu has an affinity with the state, coupled with fact that he needs the maximum support of Osun in his bid to become the next Nigerian president.  It means that the issues at stake are not just high but also critical because they border on the scope of influence and support base of the key political actors.

For some of the defectors, the election of July 16 will be an acid test of their pedigree and reach at the grassroots. This is because of what some analysts regarded as the fact that many of them had either rode on the crest of certain political godfathers to command respect or existed only under the shadows of their principals.  In the case of others, they would have the chance to prove or announce their arrival as power brokers or kingmakers in their constituencies depending on the outcome of the elections in their domains.

Candidates and the foot soldiers of both the APC and the PDP have been campaigning vigorously across the local council areas of the state. Some of the rallies have been characterised by the entry of defectors from rival parties, but the scale of such defections has not been as pronounced as has been lately. The defectors cut across the local government areas in the state. But the concentration seems to have been in areas with peculiar voting pattern and huge volume of voters in the past. Each of the parties parades prominent politicians, most of who have been in the forefront of rallying support for their parties and the candidates.

In the meantime, most pundits believe it is premature to make a categorical conclusion on the comparative advantage the current political realignment across the parties, particularly the APC and the PDP. This, they explained, is because of the likely domino effect of the outcome of the Ekiti governorship poll and the possibility of fresh alliances in the coming days.

However, the recent defections of APC members especially, supporters of the Minister of Interior, Mr Rauf Aregbesola to Osun PDP has created a ripple effect in the political circle. Their defection followed the spate of protests that trailed the controversial state and National Assembly primaries of the party in the state.  For instance, a lot of APC members have defected to PDP in notable places like Osogbo, Olorunda, Iwo, Egbedore, Ede, Ila, Irepodun, Ife Central and Ife East local governments of the state.The movement is seen as very significant because of the level of political awareness and sophistication of those areas. Added to that factor is that just last week, one of the staunch supporters of the Minister of Interior, Mr Rauf Aregebola and chieftain of APC in the state, Mr Kolapo Alimi and his followers numbering over 2,000 defected to PDP. Alimi was the Commissioner for Local Government and Chieftaincy Affairs under the administration of Aregbesola and Secretary of The Osun Progressives (TOP), a caucus of the APC that is agitating for the restructuring of the party. He was one of the lawyers that defended Governor Adegboyega Oyetola when being challenged before the court by Senator Ademola Adeleke after he was declared winner of the 2018 governorship election.

Another APC member, Lekan Oyeyemi and hundreds of his supporters defected to PDP, accusing leadership of APC of not showing concern for the welfare of its followers. During his declaration, he remarked: “It appalling that anyone not of Lagos cronies of APC is seen as a second class citizen, even in his fatherland. Such trend if not checked by the voting strength of the youths would amount to ceding our right to the crude impostors.”

In Ife East local government area, a former chairman of the party, HonourableKayode Ogundele and his counterpart in Ife Central, Adeleke Enitilo, also defected to the PDP, just as the coordinator of Ileri Oluwa Vendor in Ife Central, Mrs. Ojuolape Olagbaju, joined the fray. Speaking on behalf of the other defectors, Ogundele said: “Our decision to join “Imole Team” was borne out of their love towards making Osun great as  PDP is the only party that can give the people of Osun the change we deserve. We are very comfortable with the leadership style of Professor Wale Oladipo, he is a leader of many parts. We are going to put everything in our custody to make sure PDP win the forthcoming gubernatorial election in Osun.”

Against the backdrop of the gale of defections, some analysts have raised a number of posers. Some of these include: What are the likely implications of the defections for Governor Oyetola in his second term bid? What is the electoral value of the defectors? How is the wave of defections going to impact on Adegboyega on one hand and Adeleke on the other in the July 16 governorship poll? Who is likely to gain or lose as a result of the defection?

Speaking on these issues, the Special Adviser on Political matters to the governor, Honourable Sunday Akere said that the APC was not losing sleep over the development. According to him, the party is confident that the governor will win the July 16 election to consolidate his seat. He added that the action of the defectors, especially Alimi is inconsequential and will not have any effect on the APC in the election.

Akere, who stated that, “Alimi was on his own on the defection,” argued that “minister of interior was not part of the movement to PDP. “He held a meeting with all his political supporters who are members of TOP in Lagos last week Friday and directed them to work for Oyetola’s re-election in the state,” Alimi said. The special adviser described Alimi as a paperweight politician whose membership of the APC had been impeding the progress of the party before his defection. He further held that those that defected from APC to PDPdo not have any electoral value.

The high and low points of Ekiti election