• 16 nabbed in connection with the attack 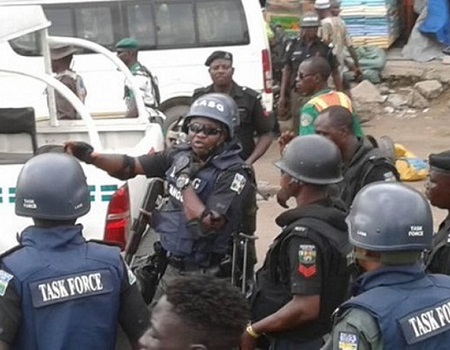 A police officer attached to the Lagos State Taskforce, Sergeant Owoeye Olumide, was hit by a stray bullet from miscreants around ‘Lily Pond Transit Truck Park’ at Apapa, even as operatives of the agency were also attacked by miscreants with dangerous weapons by the hoodlums.

The weapons, according to the chairman of the agency, CSP Olayinka Egbeyemi, who confirmed the incident, said they included cutlasses, charms, broken bottles and guns.

Egbeyemi, in a statement made available to newsmen by the spokesperson of the agency, Mr Adebayo Taofiq, disclosed that the attack was as a result of the demolition of illegal structures and shanties which serves as a hideout to these miscreants around the area.

“They hide inside these illegal structures and shanties to carry out their nefarious criminal activities on innocent members of the public.

“One of my police officers, Sergeant Owoeye Olumide, was hit by a bullet on his left thigh from these miscreants who protested against the demolition of these illegal structures around Lilly Pond Road, Apapa,” Egbeyemi said.

According to him, the demolition exercise became imperative following complaints of criminal attack by residents and traders around the area, lamenting that the entire Lily Pond area of Apapa had now become an abode for criminal elements who rob unsuspecting members of the public of their valuables “such as wallets, pieces of jewellery including phones.”

The Task Force boss confirmed that 16 miscreants were arrested in connection with the attack and that the Lagos State Commissioner of Police, CP Zubairu Muazu, had directed that all those arrested be charged to court for prosecutions.

One of the arrested miscreants, Akeem Ajibola (39yrs), confirmed that it was one of their leaders popularly called ‘Range’ that ordered them unleashed an attack on personnel of the agency.