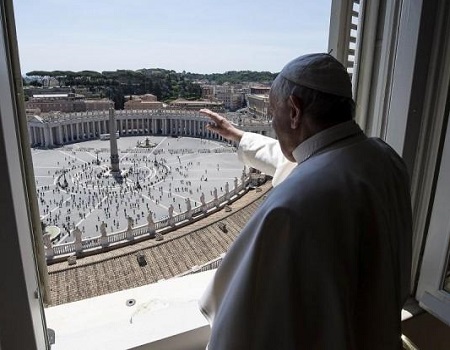 Pope Francis on Sunday said people should not let down their guard and assume that they are safe from the novel coronavirus now that infection levels are dropping in many Western countries.

He gave the admonition during his sermon at the Vatican on Sunday.

“You can’t declare your victory too early,” he said during his weekly prayers at St Peter’s Square. “Keep on being careful!”

That means continuing to follow the rules set by local health authorities.

There have been several renewed outbreaks around the world – though not necessarily at Catholic churches – after people returned to in-person services when it seemed that the virus had died down in their region.

Francis said, “he is pleased that Italy seems to have the worst phase of the virus swell behind it”. But, without naming specific countries, he said: “there are other places where infections are still spreading rapidly.”

“Just last Friday, there was one country where one person was dying a minute. Terrible!” he said, without naming it. He said that he was keeping those infected in his thoughts.

St Peter’s Cathedral and Square were roped off in March for health reasons, though both have now reopened, albeit only to limited numbers of simultaneous visitors.