• Charges new him to ensure justice, fairness during his reign. • My new status a divine call 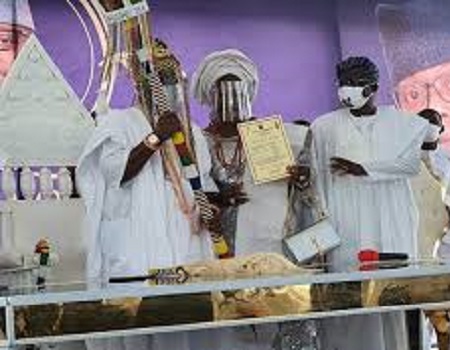 Lagos State governor, Mr. Babajide Sanwo-Olu, on Sunday presented the staff of office to the new Oniru of Iru land, Oba Gbolahan Abdulwasiu Lawal, charging the monarch to ensure justice and fairness during his reign.

Governor Sanwo-Olu described the coronation of the new oba as historic, calling on people of the kingdom to rally round and join hands with him for the growth and progress of Iruland, and Lagos State.

The governor, who spoke at a well-attended ceremony held at the palace of Oniru, Iru, in Victoria Island, expressed optimism that the kingdom, given the pedigree of the new king, would experience progress, peace, and rapid development during his reign.

“Today is a historic day in the history of Iruland, as we gather to celebrate the installation of the 15th Oniru of Iruland. On behalf of myself, the government and people of Lagos State, I heartily congratulate His Royal Majesty, Oba Abdul-Wasiu Omogbolahan Lawal, Abisogun II, the Oniru of Iruland on your ascension to the throne of your forefathers.

“Let me also rejoice with the sons and daughters of this kingdom on this auspicious occasion, which has been necessitated by the transition of the 14th Oniru of Iruland, Oba Idowu Abiodun Oniru, who joined his ancestors in September 2019, after a prosperous and glorious reign on the throne. It is my firm expectation that you will all rally round your new Oba and join hands with him for the growth and progress of Iruland, and of Lagos State. Given the pedigree of His Royal Majesty, I have no doubt that his reign will be a progressive one,” the governor said.

The governor, while noting that traditional institution “is not only a symbol and custodians of our traditions and cultures but also as rallying points for all of society; agents of stability and development,” pledged his administration continue support to every monarch in the state to realize their vision for the land.

“Your Royal Highness, I pledge the full support of the state government towards the realization of your vision for Iru Kingdom. It is heartwarming to see how the kingdom has grown in leaps and bounds in the last few decades, rising to become one of the economic nerve-centers of Lagos State.

“Our administration will continue to accord this part of the state, like all others, the attention you deserve, in terms of infrastructure, economic empowerment, human capital development, and security,” Sanwo-Olu said.

The governor, while asserting that there was no doubt that the future of Iru Kingdom continues to be bright and promising, said the ascension of His Royal Majesty, Oba Lawal, Abisogun II, marks the start of the next phase of the journey into that future.

“There is no doubt that the future of Iru Kingdom continues to be bright and promising, and that the ascension today of His Royal Majesty, Oba Abdul-Wasiu Omogbolahan Lawal, Abisogun II, marks the start of the next phase of the journey into that future,” the governor said.

He enjoined the new monarch to build on the foundation he met, saying there was no better way to ascend to this worthy throne than in this atmosphere of goodwill and harmony.

The governor changed that as father of all Iruland, Oba Lawal had an important responsibility to strengthen the existing bonds of unity for the overall development, peace and progress of the historic kingdom.

“I enjoin His Royal Majesty to build on this foundation. There is no better way to ascend to this worthy throne than in this atmosphere of goodwill and harmony.

“As the father of all of Iruland, you have an important responsibility to strengthen the existing bonds of unity for the overall development, peace and progress of this historic kingdom,” Governor Sanwo-Olu said.

The Oba of Lagos, Rilwan Akiolu, on hid part, described the ascension of the new monarch as heavenly divine, saying that was the reason every process that led to his emergence was very fast.

Oba Akiolu urged the new monarch to ensure the kingdom experience rapid development under his reign, just as he pleaded with him to ensure unity, justice and fairness among the ruling houses.

He also urged him to ensure the education of the people of Iru Kingdom does not suffer under his reign, saying that he had a responsibility to strengthen the existing bonds of unity of the ruling houses for the overall development, peace and progress of this historic kingdom.

“Move the Oniru Family forward. Ensure the indigene and non-indigene enjoy. Be open to the people. You should leave the Oniru palace better than how you met it. Ensure you give sound education to people and rule with fear of God, there is nothing so special in the worldly things,” Oba Akiolu said.

Speaking, the newly crowned monarch said he considered it a divine call to succeed the legendary Oba Abiodun Idowu Oniru, who reigned for 25 years, praying God to grant his soul “and the souls of all my departed forebears eternal rest.”

Oba Lawal, while acknowledging the “ecstatic reactions” that trailed his proclamation as the 15th Oniru of Iru, describing it undoubtedly an affirmation that, “it is God that truly crowns a king,” assured the people that he would not take their support for granted, adding that he shall be fair and just to everyone as God had given him a golden opportunity to write his name in gold while working in close collaboration with the state government.

“Distinguished guests, ladies and gentlemen, let me assure all I shall continue to work in close collaboration with the State Government in ensuring the success of the THEMES Developmental Agenda of the Babajide Olushola Sanwo-Olu’s administration in Lagos State.

Iruland is in very central to the commerce and economy of development Lagos State. I want to assure all and sundry that Iruland will continue to accommodate business development on all fronts; and remain home for all tribes, and races.

“Iruland will continue to align with the vision of our forebears for a cosmopolitan, thriving, and prosperous Lagos. Our vision is that Iruland will in no distant future rival the likes of Greater New York City, in the United States of America.

“With my experience in public service, I will continue to work with others not only to bring more development to Iruland but the entire state. I promise to live the rest of my life for my people. I will work with fellow monarchs, chiefs, community leaders and all stakeholders for the unity of our people. I will project the Yoruba culture and tradition by promoting and sustaining our identity as a people.

“Consequently, I pledge to invest resources in projects that will promote cultural renaissance in Yoruba land. I will spare no sweat in guaranteeing the advancement of the Yoruba culture and tradition. I will work with various stakeholders to achieve this,” the monarch pledged.

Oba Lawal expressed his deep appreciation to the governor, Mr. Sanwo-Olu, “for graciously approving my selection to ascend the throne,” and other members of the State Executive Council, his former colleagues, who he said he . would surely missed and the entire Abisogun Royal family who found worthy to ascend to the throne of his forebears, promising to be a good ambassador of the family.

The new monarch, in particular, said he was eternally grateful to the former governor of Lagos State, Asiwaju Bola Ahmed Tinubu, for giving him the very first opportunity to serve in public office, describing him as a visionary, with sterling leadership qualities.

“Indeed, he is a man with a very large heart and has continued to sows the good seed in people of all ages. May your light continue to shine,” he prayed.

We’re set for exam, but not in hurry ― WAEC