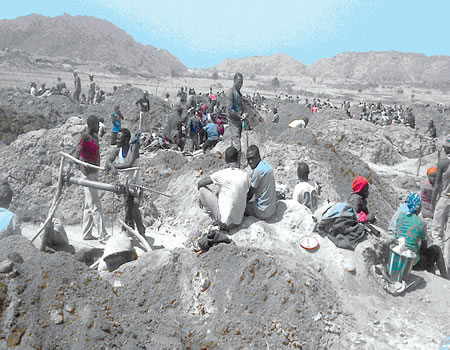 Licensed small scale miners in the country have concluded arrangements to launch its North Central regional office and inaugurate a website, created to facilitate an increase in revenue generation in partnership with governments and agencies, this week.

Speaking with journalists in Ilorin, on Tuesday, the president of the Association of Licensed Small Scale Mining Operators of Nigeria (ALSSMON), Prince Olugbenga Ajala, said that successful implementation of the information technology facility is also meant to ease mining operations among small scale mining operators, government and other relevant stakeholders in the sector for improved community development and social infrastructure.

The association, which reiterated needed cooperation between the small scale miners, the federal Ministry of Mines and Steel and the Kwara State government, said that the relationship is a win-win one for the parties, with a prospect for the nation’s economy.

He also asked operators in the nation’s banking sector to collaborate with the association, saying that, “bankers would be of great assistance to small scale miners in the area of provision of a structured loan using non-conventional collateral such as mined products as collateral security while involving an authorized mineral buying centres in the financing process to aid miners in their bid to procure mining equipment, among other sundry operational issues.

ALSO READ: Clocking 60 is a big deal for me, my father and mother didn’t ― RMD

Prince Ajala, therefore, appealed to registered miners to ensure the success of the website with their cooperation, calling on mining operators who are yet to register to be part of the epic event.

He also urged the President to identify bottleneck impeding small scale miners from accessing BOI loans, saying that the situation needs to be rectified.

“BOI only insisted on financing brand new mining equipment whereas the small miners had given their banks 100 per cent bank guarantee collateral already secured by the properties. BOI should grant them access to buy used equipment once BOI exposure has been fully covered by the customers’ bank guarantee.

“Also, the website for the association is meant to showcase all information about mining and mining operators in the country and all other information which the government can make use in getting more information about small scale miners. It will also include the needs of the operators and how government can be of help to them with the overall goal of strengthening the revenue generation and capacity of government through access to database of operating small scale miners in the country,” he said.

Clocking 60 is a big deal for me, my father and mother didn’t ― RMD