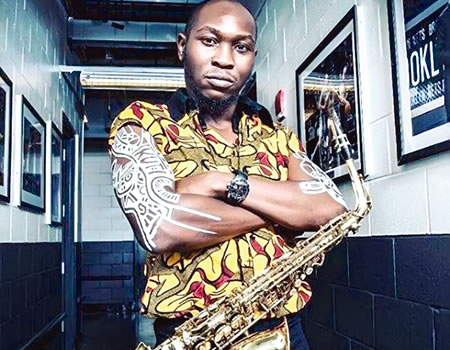 THE apple doesn’t fall far from the tree. His father, Fela Anikulapo-Kuti, was more than a musician. He was a politician and activist who stood in the peoples’ corner. More than two decades after he passed, his youngest son and leader of the icon’s Egypt 80 band, Seun, has followed in his footsteps.

On February 20, the musician launched ‘Power Mic’ at Bistro Hangout, Allen Avenue, Lagos. But he didn’t do it alone. Some of his colleagues, including Vector Tha Viper (Olanrewaju Ogunmefun), Sheni Ajayi and Falz, who couldn’t make it to the event, are part of Power Mic.

Power Mic is a movement to bridge the divide between privileged and underprivileged Nigerian youths to mobilise against injustice and oppression. It aims to sustain the consciousness achieved by the #ENDSARS protests of 2020. It equally seeks to promote dialogue, solidarity and action from the people to, among others, bridge the engagement gap between professional youths and artisan groups and create room for conversation.

Speaking at the event, Seun said, “If you are asking to know how we intend to achieve this, the answer is straightforward. We are prepared to go to the people, knowing full well that the oppressor does this only for election purposes. We will go to all the communities and, in a few months, open up the campaign to the generality of Nigerian people through ‘The Power Mic Challenge’.

However, Fela’s youngest son had preceded the formal launch with a more detailed explanation in a video post on Instagram. “The people are not tired. They want things to change definitely. We are at the point where we need to politicise our voices. We don’t protest just because it is fun to protest or we don’t have other things to do with our time. There are lots of things that are killing Nigerians. #EndSARS is the slogan, but it is not our mission. Nigeria is a country where the minimum wage is less than the cost of a bag of rice. The solution to Nigeria’s problem is with the people, their mind and their voice.

“For two minutes only, you can express yourself on why you are protesting. You can do it through a song, dance, drama skit, comedy, action, speech, poem and whatever you do. Everything will be recorded on video because they must hear the people. This is the liberation generation. All the recordings will make part of a political document. Power Mic is a political front.”

Nigerians must play their roles to surmount security challenges —Cleric