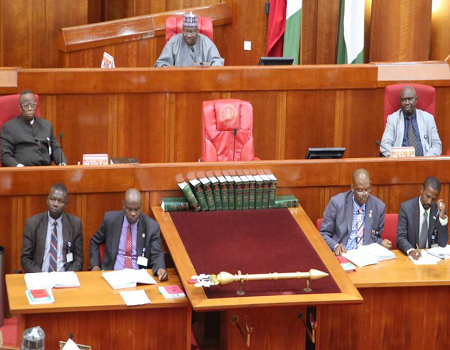 The Nigeria Senate has been urged to jettison the proposed bill on the ban on generating sets in the country.

The appeal came from a chieftain of the People’s Democratic Party (PDP) in Delta State, Chief Sunny Onuesoke in a statement made available to Tribune Online in Warri.

He appealed to members of the Nigeria Senate to, as a matter of urgency, stop further deliberation on the proposed bill to ban the importation and use of generating sets in the interest and survival of the suffering masses.

ALSO READ: Ogun working to make success of 2020 hajj —Board

It will be recalled that the Vice-Chairman, Senate Committee on Agriculture and Rural Development, Senator Muhammed Enagi Bima of the All Progressives Congress (APC) Niger South in the upper chamber has sponsored a bill proposing a ban on the use of electricity generating sets which run on diesel/petrol/kerosene of all capacities with immediate effect in the country.

The bill titled ‘Generating Set (Prohibition/Ban) Bill, 2020’ was first read before the Senate on Wednesday.

It prescribed a minimum of 10 years imprisonment for anyone selling generators.

Reacting to the proposed bill, Onuesoke   said the Senate did not need to make illegal the use and importation of generators in Nigeria.

He stressed that all things being equal, generators would naturally fizzle out if there is an uninterrupted power supply in the country.

“It is a criminal offence to use or import generators in Egypt. This is because there is twenty-four hours supply of electricity.

“Even in Ghana our nearest West-Africa neighbour, people do not use generating sets. This is because there is a regular power supply.

“Nigeria should firstly put its house in order before passing laws that could be described as oppressive to the masses,” he advised.

He wondered why Senators from Niger State are fond of proposing oppressive biĺls, recalling that it was a Senator from Niger State that also sponsored death penalty speech bill last year, and now Senator Enagi Bima proposing 10 years imprisonment for importing and selling generator in oil-rich Nigeria where the government has been unable to provide electricity and water to its citizens.

“It is saddening to imagine that this kind of senator is paid with taxpayers’ money. To begin with, does he not have a generator in his house?

“We have serious issues in the country in which power is a major one, no solution has been provided and someone is bringing this kind of bill.

“Instead of bringing this to the fore, some powerful thoughts that can revolutionise and put the country on the right path, this is all a whole senator could think about at this critical time,” he lamented.

Inclusion of women in public service

Thinking of our women and daughters