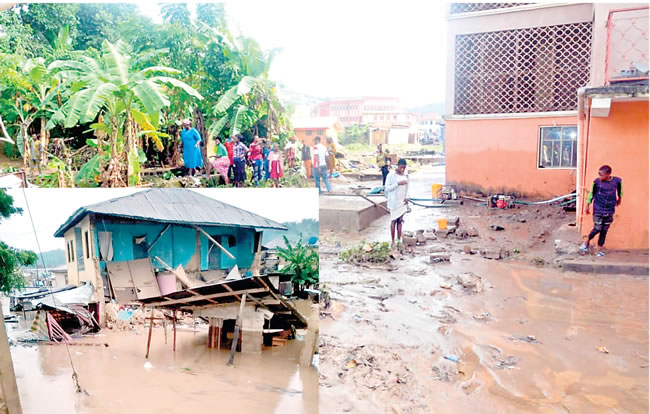 For residents of Ilawe-Ekiti, Ekiti State, it has been one long painful night of losses following a rainstorm which destroyed houses, and many other properties. YOMI AYELESO reports the frustration of the residents and their appeal to relevant government agencies to come to their aid.

Many residents of Ilawe-Ekiti , Ekiti South West Local Government Area of Ekiti State are in pains and counting their losses following a flood which ravaged the community on Thursday last week after a torrential rainfall which lasted till the early hours of Friday.

Aside from washing away many residential buildings, thereby rendering many residents homeless, the flood described as unprecedented by residents in the community, also destroyed business centres, places of worship, farms, vehicles and goods worth millions of naira.

A section of the palace of the Alawe of Ilawe-Ekiti and chairman, Ekiti State Council of Traditional Rulers, Oba Adebanji Alabi was also flooded resulting in the collapse of a section of his property.

Other victims of the flood bemoaned their fate as they had been rendered homeless and lost property they had acquired over the years.

Nigerian Tribune gathered that some of the neighbourhoods affected in the community include Oke Ibedo, Iro, Ijuku, Araromi, Adin, Oke Emo, Afuremu, Irorin, Okepa and Aaye.

According to Nigeria Meteorological Agency (NIMET) forecast, Ekiti is among the 28 states of the federation to be affected by heavy rains and massive flooding between September and October 2020. This prompted the state government to embark on sensitsation programmes for residents on safety measures to prevent flooding.

Though NiMET listed about three local government areas of Ado-Ekiti, Ijero and Irepodun/Ifelodun as prone to heavy flooding, it warned residents across the state and the government on need to be proactive. Specifically, the agency said the government should educate people to embrace proper ways of disposing their wastes.

This development made the Director General of the National Emergency Management Agency (NEMA) to visit Ekiti in September where he alerted the state government on the need to intensify efforts at averting the imminent danger to be occasioned by flood in the state.

Though no life was lost, many of the affected residents who narrated their ordeal, described the flood as unprecedented, calling on the state government to save their lives and businesses with support in cash and kind to put the pieces of their lives together.

A community leader, Lawrence Egunjobi, who expressed shock at the level of damage done by the flood, called on government to, as a matter of urgency, come to the aid of those rendered homeless by the flood.

Another community leader, Chief Sesan Ojo, said several houses had been washed away by the flood, urging government to assist in addressing some of the factors responsible for incessant flooding in the state.

A victim who simply gave her name as Bose noted that she lost her precious property, while calling on the government and philanthropists to urgently come to her aids. She noted that she had been sleeping at different places since Thursday because the flood submerged her house.

According to her, “I have not seen this kind of flood in my life because of its effect. Nothing remains in my house now and I have been moving around to find somewhere to sleep since Thursday because our house was badly damaged.

“Government and people who are privileged must come and save our lives here in Ilawe-Ekiti because we have lost so many things. We need help and assistance from any quarters for us to go back to our normal life.”

Speaking, Oba Alabi, who described the disaster as the first in the history of the town as thousands of people were affected, sought the intervention of both the local and state government for the flood victims.

“This has never happened in this town and we pray it doesn’t happen again, ” he said.

While blaming the flood incidence on lack of drainage and good layout in some streets, the traditional ruler urged the government to assist landlords and residents of his town who are now helpless due to the damage done by the flood.

The traditional ruler, who expressed displeasure at the lack of preparation on the part of authorities of Ekiti South West Local Government Area, advised the local government not to allow people to build makeshift plank stores on waterways.

He said government should begin sanctioning people for indiscriminate dumping of refuse inside drainages. Oba Alabi further called for the quick channelisation and the expansion of the narrow waterways across the community.

The deputy governor of the state, Chief Bisi Egbeyemi, who had visited the flooded areas, directed the chairman of Ekiti Southwest Local Government Area, Mr. Amire Kolade, to assess other parts of the town affected and report to his office for further action.

Egbeyemi appealed to residents of the state to be more prepared on the weather forecast of the Nigeria Meteorological Agency (NIMET) of flood disasters in most states this year.

The deputy governor said: “We sympathise with you for what has happened, we pray that we will not experience it again but we are going to assist you after we might have assessed the damage.

“The details of affected persons will be taken for necessary action; those who owned houses and other property, we would see how we can give you succour. Cooperate with our (SEMA) officials on ground to carry out the task.”

Egbeyemi who promised that government would do everything possible to avert such occurrence in the nearest future disclosed that measures had been put in place by the Kayode Fayemi administration to assist the victims.

Meanwhile, the Ekiti State governor, Dr Kayode Fayemi  has deployed officials of the State Emergency Management Agency (SEMA) and other relevant agencies to Ilawe Ekiti to ascertain the level of damage done by the flood and to commence immediate documentation of victims with a view to assisting them cushion the effects of the loss.

Fayemi gave the directive at the palace of Alawe of Ilawe, Oba Alabi, on Friday morning when he visited areas of the town affected by flood.

The governor who empathised with the Alawe and the people of the town assured them that the state government would provide succour for those rendered homeless by the flood.

Fayemi who went round the town to ascertain the level of damage done by the flood, lamented that some citizens were still in the habit of dropping refuse and waste on waterways and drainages, a situation which usually leads to flooding whenever it rains.

He urged the people of the town to imbibe the maintenance culture and desist from acts capable of endangering their community. The governor assured the people that his administration would continue to put in place measures that would ameliorate the effects of flooding on the lives and property of the people of the state.