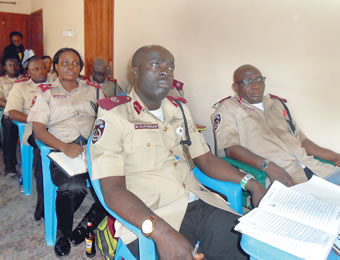 AS part of the efforts towards strategising on how to reduce accidents on our roads, the Oyo State Sector Command of the Federal Road Safety Corps (FRSC) recently held its second quarter strategic session where operational issues were discussed.

The session, which had in attendance unit commanders and sector heads of departments (HODs), was an opportunity for the state Sector Commander, Mr Yusuf Salami, to brief the officers on what is expected of them, particularly as regard the need to achieve the Federal Government’s Nigeria Road Safety Strategy (NRSS).

In his opening remarks, Mr Salami explained that the Corps Marshal had promised that his administration would continue to promote capacity development, as it assists in equipping personnel to perform better on their jobs.

“The strategic sessions also ensures that we do not derail from our goals, and as a result, we must continually examine, re-examine and re-appraise our strategies, approaches and resolutions on how to achieve the desired result.

“Therefore, the main aim of this strategy meeting is to enable the Command to evaluate its operational activities to date, while also ironing out where we need to improve upon,” the Oyo FRSC boss said, while promising that the Command would continue to channel its energy towards capacity development, while evolving a system that dispenses justice, fairly, firmly and professionally.

On the enlightenment programmes of the Command, Mr Salami said the majority of residents in the state now know that tyres have expiry dates.

“We have also been able to inform them of the need to drive carefully while behind the wheels, and it is as a result of this that we are experiencing a drastic reduction in road accidents in the state.

In his lecture at the strategic meeting, the Deputy Sector Commander, Mr Olusegun Martins, highlighted the need for officers to be dedicated to their jobs.

He explained that junior officers should carry along their immediate bosses in whatever they do.

“When you carry your bosses along, he will be able to defend you when things go wrong; there is also the need to be disciplined and committed to the job,” Mr Martins said.

On the steps being employed to discipline erring officers, Mr Martins said as soon as complaints are received against any official, then the Command will investigate it, and the appropriate punishment will be meted to such official.

“However, I want to say that our officials are highly-disciplined at this Command, and it is also what we discuss among ourselves during the strategic meetings, so everyone knows his/her limits in the discharge of his profession.

Another senior official at the Command, Mr Clement Coker, used his lecture sensitise officers on how to act while on duty.

He explained that officers need to be tolerant as they come across people with different behaviours in the course of their duties.

“Some people are temperamental, while some are cool, so officers need to develop a great human relationship in order to be able to interract with members of the public without creating a scene,” Mr Coker said.

In the end, officers were told that the need to bring about zero deaths as a result of road crashes in the major assignment of officers, and this must be done with all efforts.

Osun roads: Would the jinx be broken this time?

JCI pushes for safer roads – To know what causes road accidents, read this!