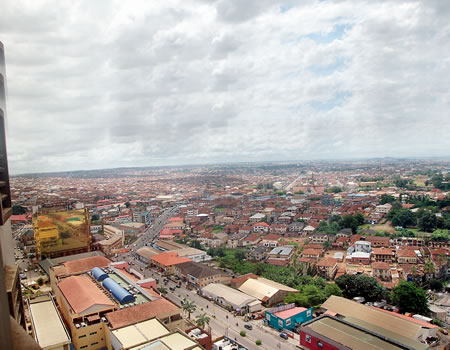 ABOUT 10 armed robbers stormed the sleepy community of Aroro Makinde in Akinyele Local Government Area of Oyo State in the early hours of Friday, killing a security guard and making away with the belongings of some residents.

Saturday Tribune gathered that the incident occurred at about 2.00 a.m.

One of the victims, Kunle Agboola, described his experience as traumatic. He said he was sleeping when the gunmen scaled the fence of his house and broke the ‘burglarproof’.

He said: “My wife travelled and left our baby with her sister to take care of in our residence. It was her sister who came to wake me up at about 2.00 a.m., informing me of the presence of the armed robbers.

“After removing the ‘burglarproof’, they came in through the space and opened the door at the entrance.

“Five of them came in while others manned the surrounding, firing shots. They told me that they were asked to come and kill me but were ready to collect ransom instead.

“One of them slapped me so hard that I felt dizzy immediately. Then they asked me to lie on the floor and asked for gold jewelry, cash and other items.

“They ransacked the house and took my two laptops, one of which is very expensive.

“They also took my phones, my baby’s carrier which we bought at N10,000, torchlight, a N1,000 note they found on a table, among other items. All the things that were taken from me are worth N1.4 million.

“They spent about 20 minutes in my apartment before leaving for the next apartment. We learnt from my neighbour that items worth almost N3 million were taken away. They were shooting as they were leaving.”

Saturday Tribune learnt that when the hoodlums moved to the house of a woman, they left after she handed them N120,000.

One of the community’s security guards, whose name was given as Joseph Barannas, a 25-year-old man from Bogoro Local Government Area of Bauchi State, was discovered missing after the incident.

He was later found dead near a private hospital where he was believed to have struggled to go for the treatment of gunshot wounds.

Police detectives were said to have visited the robbery scene where they took photographs before conveying the remains of the security guard to the mortuary of the State Hospital in Ibadan.

When contacted, the state Police Public Relations Officer, Adewale Osifeso, confirmed the incident, saying investigations  into the matter had begun.