Review of Patrick M. Lencioni’s The Motive: Why So Many Leaders Abdicate Their Most Important Responsibilities 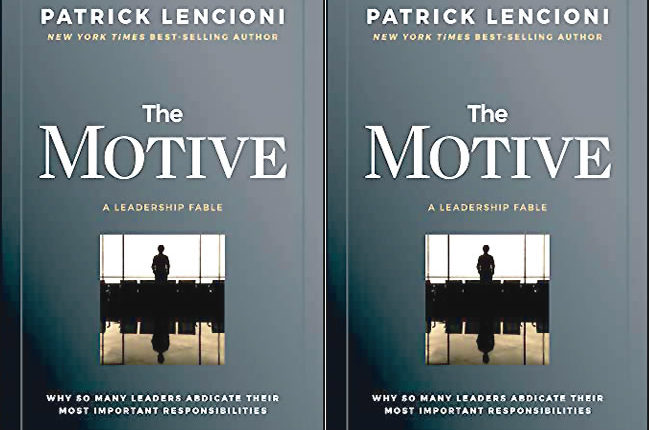 Executive is a noun and executing is a verb. ‘Executing’ conveys activity. The leader must be involved in executing rather than just being an executive.

A CEO doesn’t do any sales or marketing or finance, as much as you want to believe he or she does. As the executing officer, the only time you’re going to get involved in those activities outside your meetings is when your executives are struggling and need some help or counsel.

The best golfers and tennis players and other athletes pay people a fortune to coach them. Why in the world would one think a head of marketing or sales or finance doesn’t need a coach? And that’s to say nothing of managing them as a team. It’s a sign of neglect for a CEO to stop managing people just because he can get away with it.

Why you lead comes before what to do to lead

We can talk about what we’re supposed to do as a leader, but if we don’t understand why we come to lead in the first place, none of it will make sense.

There are only two motives that drive people to lead

You probably already know which one of these motives creates better leaders. Perhaps people should stop using the term servant leadership altogether, because it’s the only valid kind. And that should be the motive you’re leading – to bring about something good for the people you lead, not just for yourself.

That said, you might want to read on to learn why the reward-centered leadership is such a problem. A father who believes in parental perks only is going to have a hard time being a dad. Only by shifting the underlying attitude about what it means to be a parent can that dad become really good at it.

In some cases, leaders delegate team-building to head of HR. And this doesn’t work. If a person at the top of your organization doesn’t believe in developing his team, you can’t expect HR folks to believe otherwise. They’re not going to take it seriously and it’s not going to be effective.

So, don’t sit back and hope that someone else will manage the difficult emotions and awkward moments because delegating people development never works.

Managing individuals isn’t just about helping them set the directions but also ensuring the direction is aligned with the missions of the organization. It’s also about identifying potential obstacles and problems as early as possible and coaching for success.

It’s also worth noting that trusting someone isn’t an excuse for not managing them.  Knowing how they’re progressing or falling short is far from micromanagement.

Alan Mullaly, CEO of Ford was successful because of something the author calls ‘joyful accountability’. Alan liked to approach people who needed correction and cheerfully let them know it was completely up to them whether they change their behavior or attitude. He would remind them if they couldn’t, he would still be their friend but they couldn’t continue to work at Ford.

After all, by avoiding difficult conversations, you’re trading off your discomfort for theirs, leaving them to experience even greater pain when their shortcomings manifested themselves during a performance review, a compensation discussion or worse yet an exit interview.

If your meetings are bad, then there’s a solid chance your executives are having bad meetings with their teams. And it just cascades from there. The person who’s responsible to run effective meetings is ‘you’– no one else. You can’t delegate that job as a CEO. It’s yours and yours alone.

Studies suggest it takes seven times of communication for employees to believe executives are serious about the message. Until then, employees discount it as corporate speak or internal propaganda.

Many leaders think they’re insulting their audience by repeating a message. They forget employees have no idea what’s going in their organizations. Think about this for a minute – no reasonable human being has ever left a company because of too much communications.

The best leaders see themselves as CROs – Chief Reminding Officers. They’re far more concerned about employees being uniformed than they’re about being criticized for redundancy.

Here’s the truth. Almost everyone (including the greatest leaders ever lived) is fallible to flattery and prone to fatigue. In other words, even the best of us can slip almost unconsciously into reward-centered leadership at some point in our lives.

What we can do best is to learn from our mistakes, build on our strengths and get better with each attempt. Remember, as with every calling in life, there’s no end to leadership mastery.

How to Grow Your Digital Assets?

Has Cryptocurrency Taken Over the Stock Market?