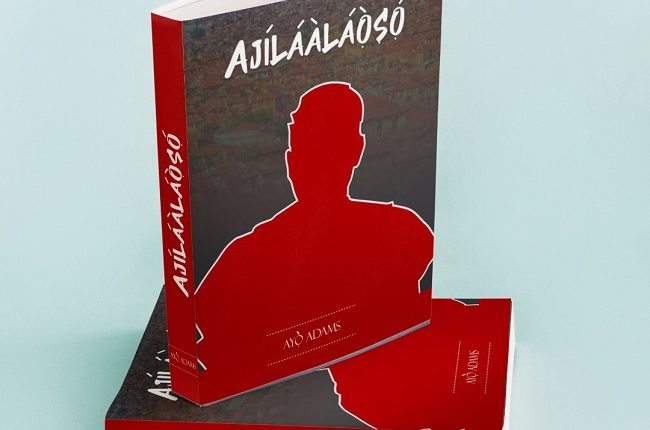 A mysterious man navigates around the city of Ìbàdàn. He is neither evil nor good. Stealthily, he is in every household, every street, among peers hanging out, and at places of work. He is a man that Yorùbá people call, “etí t’ólé, etí t’óko (the one with ears that picks sounds both at home, and, in the forests).” He doesn’t live with you, yet, he sees and hears everything you do. His sources of information, never fail to provide him with the best of mind-blowing information. The man who swings his attire left and right while walking gently in the garden of information. A man who heard enough to pronounce him as a philosopher. A man whose name, echoes through the wind. His name is Ajílàáláọ̀ṣọ̀!

Ajílàáláọ̀ṣọ̀ features as the great storyteller, and, as a character, telling his stories in the book Ajílàáláọ̀ṣọ̀ by Ayọ̀ Adams. The beautiful part of the book is how it is set in major towns, households, areas and streets in Ìbàdàn (both rural and urban).

To drive home his stories, Ayo employs code-mixing, which sees Yorùbá in a marriage with some English words, phrases and statements as it reflects in our everyday use of language. – an interesting attempt to invest reality into the stories. In addition, comic relief becomes a spectacular element in the stories. Exploring almost every chapter, you are bound to be greeted with comic relief, either in a compliment or inaction.

Incredibly, the grand use of proverbs, idioms, incantation extracts and wordplays by Ayọ̀ Adams drives you into a realm of extraordinary lingual highness. Arguably, not many writers these days appreciate the use of Yorùbá language. But, the author has been able to adopt the language like a child of his own and, transform it into his intellectually to deliver the most breathtaking stories in Ajíláàláọ̀ṣọ́.

The professional display of the writer’s control of the Yorùbá language, would no doubt inspire several writers out there, who wish to write in Yorùbá, but, faced by the fear of how the audience would be receptive towards their work.

A journey into some stories in the book; Ajílàáláọ̀ṣọ̀ Dé takes us into the diversity and dynamism of life. Nothing is as people think and, nothing is as predictable. In À Rìn Fẹsẹ̀ Sí Ò Kan Máìlì, we see into the crime scene that the powerless Nigerians face on a daily basis in the hands of policemen and Sars officials. A Ní Ká Jẹ Èkuru Ọ̀ràn Kó Tán exposes the politics of power in high-class societies, revealing the influence of crime and how some top figures in the society benefit from the atrocities. The story peaks into a corrupt system that remains unfixable because of some people in the system itself. The suspense, thriller, comic relief, action in these crime stories are phenomenal.

The drama, comedy, deceit and sizzling romance in Omi Àti Ẹ̀jẹ̀ are completely engrossing. We are also driven into the story of a young graduate who couldn’t find a job, to sort his bills. After a convincing story from his friend, Isiaka, he resorted to driving a Micra Cab in the city of Ìbàdàn. Not out of desire but, out of necessity. This story of young unemployed Nigerians is well captured in the chapter, Ajílàáláọ̀ṣọ̀ Wa Taisí.

When you wish to praise someone, always have a second thought about it. People listen to your stories, just so, they can know when and where to strike. That is what we see in the women who exposed their sexual relationships with their husbands and, those that their husbands can’t perform to expectations. The interesting tale is told in Bí Iṣu Ẹni Bá Ta

Generally, the book explores a lot of experiences in our daily lives as Nigerians. Extortion, crime rings, sexual violations of minors (as expressed in the story of Agungirékọjá), deceit, romance, friendship, unemployment and, many other vices Nigerians face on a daily.

The book is an eye-opener to many problems the helpless Nigerians go through, but, are powerless to speak about. If you have been a victim of circumstance in Nigeria, this book will touch your experience.

The author lived in the experiences of the people of Ìbàdàn. Centring the stories around the areas of Ìbàdàn shows how particular and unique this work is. It is easy to relate to those areas and, the author’s use of simple Yorùbá language construction remains commendable.

We live in a society where people hardly speak Yorùbá, without mixing it with English words or sentences. The author made sure to let such language culture reality reflect in this book.

The names of the characters are purposely deployed into the stories. Yorùbá names, Igbo name (Ada), Arabian names, which all reflect the modern interethnic marriage and religious diversity in our present-day society are well reflected in Ajíláàláọ̀ṣọ́. In fact, some names like, Agungirekojaewe, Fiwakewa among others, are not just names but, they are names that help the audience predict the character’s person before the action.

In Ajíláàláọ̀ṣọ́, Ayo Adams brings us into a sensational world of happenings that affect individuals and different classes of people in our society. Ajíláàláọ̀ṣọ́ is a compelling read.

The Lagos State government on Friday announced that it will close the popular Ojota interchange up to the second bridge in the area for three months beginning from Monday, September 21, for some repairs…Ajílàáláọ̀ṣọ̀

Hundreds of followers of the Speaker of the House of Representatives, Hon. Femi Gbajabiamila have continued to react to the twitter message on his official twitter handle: @femigbaja, on his engagement with his counterparts from Ethiopia, Ghana, Kenya, Senegal and South Africa on the planned collaboration in the joint task of loosening the stranglehold of foreign debt on our economies, ahead of the 2021 conference of African Speakers, scheduled to hold in Abuja…Ajílàáláọ̀ṣọ̀  Ajílàáláọ̀ṣọ̀