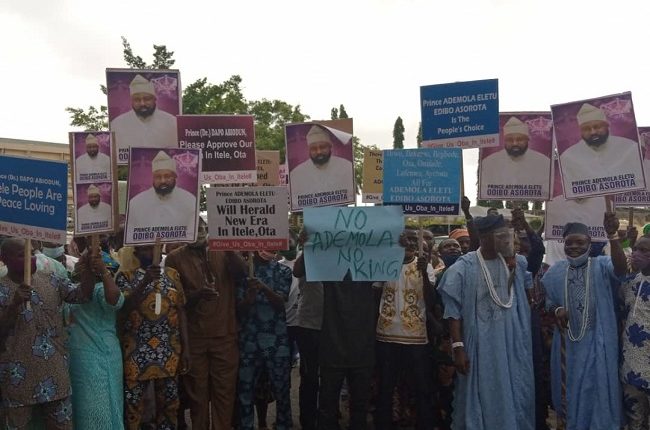 Residents of Itele-Ota community in Ado Odo/Ota Local Government Area of Ogun State have asked the state government to ratify the selection of Prince Ademola Eletu Odibo Asorota as the new Onitele of Itele.

The residents, led by their leaders, stormed the governor’s office to press demands for the appointment and installation of Asorota, about fifteen years after the demise of the former Onitele, Oba Jimoh Arowolo.

Some of the residents carried placards bearing various inscriptions including “Itele People are peace-loving”, No Ademola, No King”, “A town without a king is a ghost town” “Itele People deserve a king”, “Please, approve our king as nominated by all the kingmakers and family.”

One of the ‘baales’ who led the protesters, Oluyemi Onifade said that Asorota was elected by kingmakers in the community but his coronation is being delayed by the reluctance of the government to ratify his election, appoint and install him.

“So that we can stop all this nonsense because it has drawn the town backwards to the extent that no meaningful development is taking place in ‘Itele’. We don’t want chaos, we don’t want a crisis in ‘Itele.'”

He also said the decision of the government on the selection process rests on the legal advice of the ministry of justice where the case has been sent to.

A fuel tanker has exploded at Anthony inward Gbagada, Lagos State. This happened as a result of the tanker losing control while on motion and fell sideways thereby leading to an explosion and got two unidentified vehicles burnt…Ogun community

The Lagos State government on Friday announced that it will close the popular Ojota interchange up to the second bridge in the area for three months beginning from Monday, September 21, for some repairs…Ogun community  Ogun community

Hundreds of followers of the Speaker of the House of Representatives, Hon. Femi Gbajabiamila have continued to react to the twitter message on his official twitter handle: @femigbaja, on his engagement with his counterparts from Ethiopia, Ghana, Kenya, Senegal and South Africa on the planned collaboration in the joint task of loosening the stranglehold of foreign debt on our economies, ahead of the 2021 conference of African Speakers, scheduled to hold in Abuja…Ogun community Ogun community