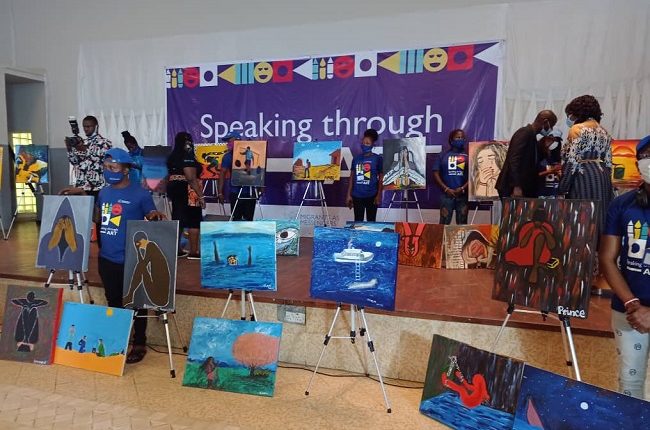 Returned Migrants known as Migrants as Messengers (MaM) at the weekend, in Benin, began a visual Arts exhibition to demonstrate their different experiences during their attempts to reach Europe through the desert and the Mediterranean Sea.

The theme of the Arts exhibition was ‘Speaking through Arts’.

Mr Frantz Celestin, the Chief Mission of the International Organization for Migration (IOM), Nigeria, said during the exhibition that the initiative brought together returned migrants, who ordinarily were ashamed, the opportunity to tell their stories through artworks.

Represented by Mr Aigbeze Uhimwen, IOM, Senior Project Assistant, Celestin said that the different artworks were done by the returned migrants, who had never painted before, but were empowered by IOM to learn the trade to promote safe migration.

“Arts cuts across all discipline, it is a universal language that tells a story without the victim speaking.

“They have each expressed their experiences of irregular migration and educate would-be migrants of the associated dangers,” he said.

Elaigwu noted that the programme was designed as a behavioural change communication strategy to help victims of trafficking and irregular migration tell their stories through paintings, crafted arts, photography and African theatre among others.

“Through coded narrative embedded in art painting, the program seeks to speak to the diversity and advances of the present to reduce the potential risk that could befall potential migrants,” Elaigwu said.

The Permanent Secretary, Edo Ministry of Arts, Culture and Tourism, Mrs Itohan Bazuaye, in her remarks said that the state government was vigorously fighting the scourge of human trafficking and irregular migration in the state.

“Our efforts also involve facilitating, rehabilitation and re-integration of returned migrants into the society,” she said.

According to her, “a picture speaks more than a thousand words. This initiative would help those that are ashamed to tell their stories without speaking.

Barr. Chidiebere Oruruo-Ifudu, NAPTIP Zonal Commander, Benin Zonal Command, disclosed that a Blue Bus had be inaugurated in the state to provide on the spot counselling to victims of trafficking and irregular migration.

Mr Brown Okojie, the leader of the Migrants as Messengers (MaM) thanked IOM for the three-day empowerment programme.

In spite of the huge investment in the water sector by the government and international organisations, water scarcity has grown to become a perennial nightmare for residents of Abeokuta, the Ogun State capital. This report x-rays the lives and experiences of residents in getting clean, potable and affordable water amidst the surge of COVID-19 cases in the state…Returned Edo migrants  Returned Edo migrants

The Lagos-Ibadan railway was inaugurated recently for a full paid operation by the Nigerian Railway Corporation after about a year of free test-run. Our reporter joined the train to and fro Lagos from Ibadan and tells his experience in this report…Returned Edo migrants  Returned Edo migrants