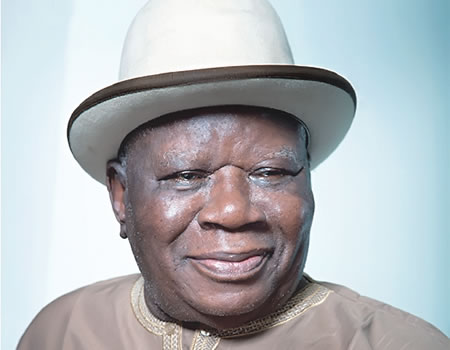 ELDER Statesman and leader of the Pan-Niger-Delta Forum (PANDEF), Chief Edwin Clark, has advocated a meeting involving the leaders of the North, the South West, South East and South South to arrive at a consensus on the critical issue of restructuring.

Chief Clark, in a statement on Sunday, welcomed the inauguration of a 12-member committee by the North which is headed by the governor of Sokoto State, Hon Aminu Waziri Tambuwal.

According to him, the time has come for Southern governors and leaders of major ethnic groups including Afenifere, Ohaneze and Pan-Niger Delta Forum (PANDEF) to meet with Northern governors and traditional leaders to harmonise positions on the issue of restructuring.

He commended the setting up of the Tambuwal-led committee, adding that the proposed grant meeting should be held at the conclusion of Tambuwal’s committee report.

He asked the Federal Government to organise, coordinate and provide a secretariat for the said meeting adding that Tambuwal had already started on a good note by declaring that the report of his committee would be arrived at through robust public debates,

Clark expressed hope that with the inauguration of the committee, some Nigerians, who had condemned restructuring, including Kaduna State Governor, Nasir El-Rufai would have a change of mind.

According to him, restructuring the country had nothing to do with the breaking up of Nigeria, adding that it was about the creation of a new Nigeria where all citizens would be equal.

Clark in the statement also urged the 12-man Northern Committee on Restructuring headed by Tambuwal to consider the 2014 National Conference Report in its deliberations.

He added that the Northern Committee on Restructuring also has a duty to examine other previous documents, conferences and position papers if it must arrive at an equitable position to move the country forward.

He stated that the 2014 Confab report contains 600 recommendations that will be useful in the course of the Tambuwal-led committee’s work.

He added that the delegates to the National Conference cut across all geopolitical zones of the country who took time to thoroughly x-ray all previous reports on the national question before coming up with the report.

He said: “It must be remembered that the North fully participated at that all-embracing conference and all Northern representatives were signatories to the 600 recommendations made.

“It is reassuring to know that two of the members of the Tambuwal committee, Emir of Gunmi, Justice Hassan Gunmi and Gbong Gwon Jos, Da Jacob Gyang Buba were delegates to the 2014 conference.

“It is worthy to note that the idea of looking into the 2014 conference report and the idea of restructuring have been muted in several quarters.

“Some of the persons who have addressed the very important issue of restructuring include the Sultan of Sokoto, His Eminence, Sa’ad Abubakar and Former Head of State, Gen. Yakubu Gowon(retd).

“They have all thrown their weight behind the calls for a restructuring of the country, as contained in the speeches they made in different form.’’

Chief Clark mentioned some of the recommendations of the 2014 National Conference which he said is crucial to the restructuring of the economy included state autonomy and boundary adjustment.

Others according to him are, the creation of states, the creation of the anti-corruption court, gender balance, and rotation of presidency among the six geopolitical zones as well as re-adjustment of some government offices for transparency and accountability.

He further said: “Nothing inimical or detrimental to any section of the country was discussed or recommended by the conference to warrant it being condemned or manipulated by some unpatriotic Nigerians.

“It must also be remembered that delegates from the South-South zone also participated fully in the celebrated 2014 conference and endorsed all recommendations of the conference.

“There was no dissenting voice nor a minority report. It is, therefore, a breach of trust by some delegates of the conference to disassociate themselves from the collective decision taken by all 492 delegates.

“It is also not true that the Northerners were in the minority.

He also noted that restructuring was about a Nigeria where the federating states or regions were able to develop at their own pace under the practice of Fiscal Federalism.

He stated: “We believe that with restructuring, we can achieve a permanent peace in the Niger Delta and across the country as a whole.

“I am confident that a new Nigeria in which peace, equity, and justice will reign will be born after the harmonization of the ideas of the various groups.”

Jonathan shunned PDP because they betrayed him ― Clark