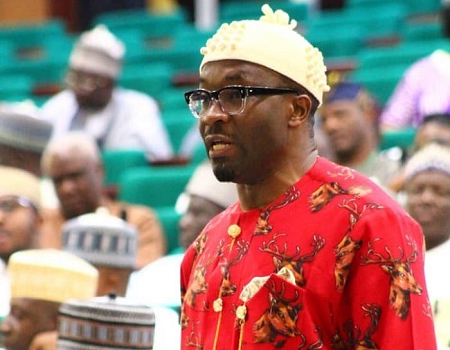 The leadership of the House of Representatives, on Thursday night, assured that the motion on the removal/sack of the Minister of Communications and Digital Economy, Isa Patami, will be heard when presented by the Minority Leader, Hon. Ndudi Elumelu, in line with the standing rules of the 9th Assembly.

Chairman, House Committee on Media and Public Affairs, Hon. Benjamin Kalu gave the assurance via a statement titled: ‘The House will hear Rep. Elumelu’s Call for Pantami’s resignation when it is properly presented before it.’

According to him, the sponsor of the motion moved under ‘Legislative Privilege’ could not be subjected to debate.

The statement read: “The House is aware of several publications on online and traditional media claiming that the Speaker of the House, Rep. Femi Gbajabiamila blocked a motion by the Minority Leader of the House, Rep. Ndudi Elumelu purportedly demanding the resignation of the Minister of Communications and Digital Economy, Isa Pantami.

“This misrepresentation of facts for the sake of sensationalism has necessitated this statement of clarification.

“For the avoidance of doubt, the House is guided by the Standing Orders of the House of Representatives (House Rules) in its operations and administration.

“In this case, the minority leader should have known better than to present such an issue for debate via Order 6 of the house rules which only applies to legislative privileges.

“He ought to have come under Order 8 Rule 4, as a matter of urgent national importance, or via a motion on notice to enable other members to second the motion and make their contributions through debate in a truly democratic fashion, after which the house would be able to take a position on the issue.

“It is, therefore, pertinent to inform Nigerians that the house has not acted in error, but in line with the provisions of its rules.

“All insinuations that the house did not allow democratic debate to take place on the important issue of Pantami’s resignation are simply untrue. The house acknowledges the severity of the issue and its nature as a matter of public concern.

“As always, the house stands ready to give audience to Rep. Elumelu or any other member of the house on this issue, provided that such audience is sought through the proper channels and brought under the relevant rules of the house,” the house spokesman assured.

In spite of the huge investment in the water sector by the government and international organisations, water scarcity has grown to become a perennial nightmare for residents of Abeokuta, the Ogun State capital. This report x-rays the lives and experiences of residents in getting clean, potable and affordable water amidst the surge of COVID-19 cases in the state. Reps to debate Elumelu’s motion on removal of Pantami when properly presented

Unemployment is the reason for rise in banditry ― CAN president