Cities and rural areas of the country including the diaspora, last Sunday, witnessed a massive turn-out of youths of the Redeemed Christian Church of God (RCCG), marching around their vicinity for intercessory prayer for Nigeria and the entire world.

The “Global Prayer Walk” which was the theme of the event was held in streets and major roads in various states of the country including the Federal Capital Territory with fervent prayers, songs, and positive proclamation for Nigeria.

Various inscriptions of prayers such as ‘God will revive Nigeria’, ‘Nigeria must be healed’, ‘Lord should arise and consume all enemies of Nigeria,’ etc, were also displayed by the youths, while consistent prayers were rendered for the restoration of peace in the country and that God should fish out all the bad eggs among the country’s leadership.

The youths, drawn from different branches of the church trekked long-distances, rendering prayers and later converged at strategic locations to continue the exercise with comprehensive prayer sessions for Nigerian citizens, its leaders, and the nation at large.

The Oyo State version of the event was equally massive as the youths of the church, with the approval of the state Commissioner of Police, Mrs Ngozi Onadeko, stormed different parts of Ibadan and other towns in the state with the exercise.

One of the major meeting points in Ibadan was at the Challenge area as they converged there to intercede for the country; they equally prayed for the leaders and the restoration of peace in the country.

The Intercontinental Youth Pastor, RCCG, Pastor Belemina Obunge, noted that the General Overseer of the church, Pastor Enoch Adeboye, had ignited the youths that their time has come to fly and as a result, “the youth were determined to emulate excellence, exceed expectations, and evangelise enthusiastically.”

Speaking further during the event, he said: “By the grace of God, we are out here on the streets of Nigeria, and every other nation of the world, to proclaim the victory of Calvary over situations and circumstances. We all know that we have reasons to pray, so we are out to pray, we are praying against COVID-19.”

Pastor-in-charge of RCCG Region 21, Oyo State, Pastor CAF Obasa, told Tribune Church that the initiative was to seek God’s face for the revival of our currency and economy; pray for government and peoples’ intellectual and spiritual breakthrough.

“It is an intercontinental prayer movement that is to birth a new order in nations around the world, especially Nigeria. That is why we are out here on the streets. It is better to be late than never, so it is not late for us, but the fact is that we need to pray more now than ever,” he added.

He also expressed confidence that the prayer walk would achieve its aim and that God had answered the supplications of youths of the country for a revived Nigeria in all ramifications.

Regional Youth pastor-in-charge of Region 21, Ibadan, Pastor James Oyesanmi, said that one of the missions of the church is to always support the nation and the people generally, physically and spiritually while the efficacy of prayer would bring a solution to the problem facing the country, adding that, “nations all over the world need prayer at this time. The challenges brought by COVID-19 have affected the economy of the world. We believe that with prayer, there is nothing God cannot do; so this prayer walk is called by the youth and young adult department of the mission.” 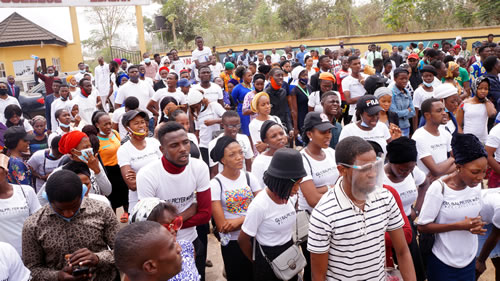 He also noted that the development was not a protest, but purely a prayer walk. He added that the church has always lent its voice on issues that are of national importance.

“This walk is essential for prayer. It is not a protest; the Commissioner of Police, Oyo State is aware and she has given his approval. So we are walking to pray for a great revival of Nigeria,” he said during the event.

Pastor-in-charge of Throne Room Parish, Transcorp Hilton Hotel, Abuja, Pastor Tunde Benjamins-Laniyi, who also led a large number of youths in Abuja, called for divine intervention in the efforts by the Federal Government to solve the problem of insecurity in the country.

The cleric, who is also pastor-in-charge of Youth Province 11 which covers Abuja, Nasarawa, Kogi, Kwara, Niger and Benue states, said the rising insecurity and other challenges confronting the nation has become worrisome and as such, needs divine intervention to overcome.

A tale of two ‘cities’