Preparing ground for referendum in Nigeria 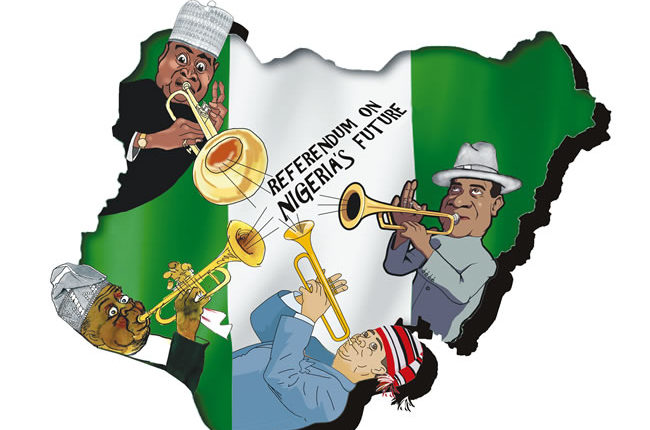 KUNLE ODEREMI examines the growing call for restructuring and/or referendum to renegotiate the terms of the Nigerian union, predicting that should the Federal Government ignore this strident call, the agitation will become fiercer in the days ahead.

AT the preliminary stage of preparations for the 2014 National Conference, many fundamental issues came to the fore for serious and intense public debate, analysis and dissection. Some bordered on constitutional framework, due process and missing gaps and booby-traps. Suffice to say that those misgivings were informed by the circumstances and pitfalls that characterised similar national conferences meant to tackle national malaise and set the country on the path of nationhood.

So, there were questions about possible no-go areas and whether the authorities were sincere and altruistic in convoking the epochal 2014 Confab to resolve national issues. One of those crucial questions also bordered on the necessity of an enabling enactment to support the conference because of its strategic importance in tackling challenges stalling Nigeria’s attainment of nationhood. A popular school of thought then was that the outcome of the conference should be sacrosanct.

A commitment to the sanctity of the final decisions to be arrived at by the 600 delegates drawn from a broad-spectrum of the Nigerian society threw up a preponderance of views, one of which was that the final report should be subjected to a national referendum. These demands were eventually obscured apparently by euphoria of momentary victory by advocates of national conference and partly, by vocal dissenting few from an influential section of the country. In the midst of the cacophonies occasioned by the country’s widening socio-economic imbalance and increasing poverty among Nigerians, the call for restructuring of the country and referendum to determine and redefine its whole identity has become more strident.

The current clamour, however, is not without prejudice to the ongoing efforts by the National Assembly to amend the constitution which most Nigerians believe will only amount to papering the widening cracks in the nation’s structure.

So, a statement at the dawn of Nigeria’s 60th independence anniversary credited to the Secretary General of the Arewa Consultative Forum (ACF) has triggered an intense discourse on the issue of referendum, especially against the backdrop of the frenzied agitation for the restructuring of the country.  From an unusual quarter also came a warning about the imperativeness of restructuring. Head of the Redeemed Christian Church of God (RCCG), Pastor Enoch Adeboye, added his voice at lately, warning that a break-up of the country will be imminent without restructuring the federation. For the purpose of emphasis, most of the agitations are anchored on specific issues of devolution of power, fiscal federalism, citizenship, system and form of government, among others.

Referendum has been used to resolve very knotty issues in many countries. That right given to the people to affirm or reject a constitutional matter, especially on the right to self-autonomy. The issue of referendum is encapsulated under the 1966 United Nations International Convention on Civil and Political Rights (ICCPR) with Nigeria as one of the signatories and requires that member-countries respect the civil and political rights of its people.  Referendums have been conducted under the framework in United Kingdom based on agitation by Scottish; Indonesia, Singapore and Sudan at different times. In 1961, the UN superintended over the referendum conducted in Nigeria shortly after independence to determine the fate of Cameroons. While the Northern British Cameroon voted to join Nigeria, the Southern part opted out.

According to https://journals.openedition.org/rfcb/366  in an article with the title: The Earlier History Of Referendums On Independence notes that the first referendums on independence were held in the confederate states in America in the early 1860s. The first referendum was conducted in 1788 in Massachusetts, on whether or not the people wanted to join the newly minted United States and by mid-1850’s, the practice became a norm to consult the citizens on major issues of constitutional importance. It was natural so much that Texas, Virginia and Tennessee submitted the decision to secede from the Union to the voters in 1860.

Mass-based regional organisations, experts and professional bodies remain leading advocates of restructuring, the idea and clamour, the ACF secretary, Murtala Aliyu said was befuddling and required clarifications by the protagonists.  According to him, “What is restructuring? Everybody has his own definition of restructuring. Some say it is fiscal federalism while others say it is power devolution. It depends on what the proponent of restructuring wants. Historically, the North wanted ‘confederation’; the South-West wanted ‘federalism’ while the South-East wanted ‘unitary’ at that time because they had advantage of education. Then, 70 per cent of the civil service and 70 per cent of the officers’ corps of the military were from the East. So, they were looking for a unitary arrangement. The North was feeling suffocated, so, the region asked for confederation. Now, the table has turned,” he explained.

Aliyu was emphatic that the North was not frightened by such agitations and restructuring to be precise. His words: “What we want is that ‘let us define what we want.’ If we want to be in Nigeria and if we don’t want to be in Nigeria, let’s sit down and agree. If you want to be in Nigeria, you can’t suffocate me and take advantage and say we must stay together. So, the North is looking at all options. We can restructure. We can become confederation. We can devolve power. We can have state police and all that we want. But I can tell you that the thinking of the North now is that we should actually have a referendum if we want Nigeria or not. If we want a Nigeria, then, we must sit down and see how Nigeria will work. So, if we need the country, let’s sit down and decide that we need the country first.  Then, we can now sit down and decide on how our country can work for all of us.”

The Coalition of Northern Groups (CNG) backed the ACF on its general observations and suggestions. Its national president, Yerima Shettima, said that the North cannot be cowed anywhere. The ACF reference to referendum as an option to resolve key issues bothering the country fascinated and tickled Ohanaeze Ndigbo, Afenifere, the Southern and the Middle Belt forum (SMBF), among other organisations, with Ohanaeze through its president-general, Chief John Nwodo, saying it was what the Igbo group stood for in its agitation. But he was skeptical on the sincerity of the ACF on the idea. He claimed: “ACF is just talking because they know that there is no provision for a referendum in the constitution and that it will inevitably lead to the republics of Biafra and Oduduwa which the North has been dreading.” He contended that there was nothing like ambiguity in the call for restructuring.

On its part, Afenifere said it had consistently said there should be provision on referendum in the Nigerian Constitution. A prominent legal practitioner, Chief Ladi Williams, also reportedly suggested that such referendum should be supervised by the United Nations (UN) and African Union (AU) to make the process free, fair and credible.

There is no consensus among experts on the feasibility of conducting a referendum under the 1999 Constitution (as amended). However, a few experts contend that though the constitution does not expressly provide for it, the subject-matter is implied through a combination of provisions in the document. In the opinion of a political analyst, Stephen Kola-Balogun, it has become necessary to establish a National Referendum Commission, ostensibly to address the issue of rewriting the constitution or restructuring the polity, but under the atmosphere of a subsisting constitution. He averred that there was no direct provision for ‘Referendum’  in the constitution, but that it was more than implied. Citing Chapter 11; Sections 13 and 14 as part of the framework, he stated that “if the 1999 Constitution states that sovereignty belongs to the people, it stands to reason that the power can be given back to them whenever they ask or require it.”

Expectedly, Nigerians are waiting on the government of President Muhammadu Buhari to see whether or not it would heed the popular clamour for a re-invigorated country. What is almost certain, however, is that the agitation for a re-negotiated country whether through restructuring or a referendum will become louder and unceasing in the days ahead.

Zamfara and Nigeria at crossroads

We want to redefine Afrobeat –Shuavy