We want to redefine Afrobeat –Shuavy 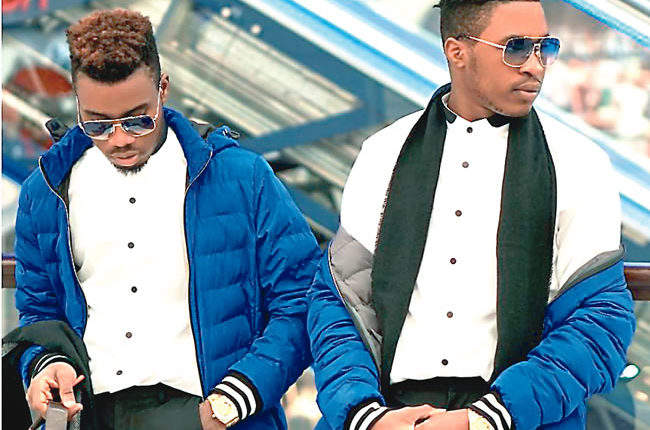 Joshua and Victor Onodu are an emerging music duo who are popular by their group name Shuavy. In this interview by SEGUN ADEBAYO, they share their plans on dominating the industry and taking Afrobeat global, among other things.

When did you guys start making music?

Making music is what we have been doing since our childhood. I remember my brother and I would always gather our siblings at night and mime songs of popular artistes such as D’banj, P-Square and 2face. They would laugh and cheer us. We performed break dance and stunts at several university shows. Where we also grew up contributed to our music passion. Our parents and neighbours would wake us every weekend with their speakers buzzing with music. Listening to those songs made a significant impact on our musical background.

It is interesting that your musical journey started since you were kids. From then till now, how would you describe the experience?

It has been incredible. Over the years, we were more into promoting our fashion brand. Still, since we began pushing music, it has been a worthwhile experience. The momentum has been great, and the experience has opened our eyes to a lot of things we never imagined. Overall, it has been fantastic.

One major challenge you have encountered in your journey?

The major challenge was funding. It costs a lot to produce a good song and promote it. Thanks to our management for pulling through. We’re trying our best to pull up, and we’re not giving up anytime soon.

In the course of your musical career, how many songs do you have to your credit and what should fans expect from your stable?

We released a four-track EP recently, and the acceptance has been good. We still expect more from it, but it is doing well presently. One of the singles off it is ‘We dey’. It appears to be the fans’ favourite. We are working on releasing another project very early next year too. We won’t starve our fans at all.

You have an EP on the airwaves and another in the pipeline. How and where do you draw inspiration for music?

Many often mistake you for twins. Would you like to clear the air on that?

How did you guys come about the name Shuavy?

With many musical groups and duos breaking up after a while including P-Square. Is it something you equally anticipate?

This is one of the questions we answer all the time. To be honest, we have had this conversation with each other many times. I don’t know the kind of relationship those duos had but I’m sure nothing can split my brother and me. We’ve come a long way and I can’t even imagine it. We felt sad seeing P-Square break up. We looked up to them while growing up. It is our hope to see them come back together again.

What makes Shuavy unique from every other artiste in the music industry?

Have you listened to our EP, ‘Space Lane’? Then you would see that we sing a different form of Afrobeat. We do not only sing, we also rap and dance. We took the time to sample what everyone does and created a niche for ourselves. Also, we are fashionistas. I doubt any artiste can stand us on the runway. Even though we have idols in the industry, we are not trying to be like anyone.

The like of Rema and other young artistes have gone big in a short space. Do you see yourselves at that level anytime soon?

Definitely. Many artistes got famous when they were young. Wizkid was 20, Olamide was 20, Davido was even younger. So, in the nearest future, we believe we will be there too and we are working and praying very hard for it. We also want to take Afrobeat global and support the movement. Then, we really want to help young artistes like ourselves make waves in the industry.

Are your parents in support of your choice of career?

They are not in full support yet, but we are adults and have to stand for our passion. Even though they wanted us to go the corporate way, they are now gradually showing us support.

As young artistes, who are the people you look up to in the industry?

There are so many of them. We look up to the old P-Square, Wizkid, Davido, Burna Boy, and many others. Their achievements motivate us.

Where do you see yourselves in the next five years?

We see ourselves gracing stages in the world, collaborating with international acts and redefining the face of Afrobeat.

Preparing ground for referendum in Nigeria