In praise of beer, culture

Arts and Culture
By Akintayo Abodunrin On Jul 10, 2016 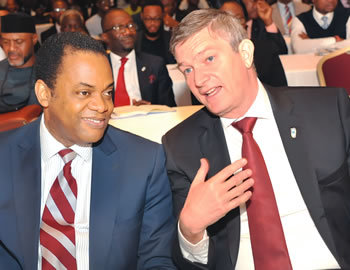 THE theme, ‘Beer and Culture’ was the attraction. How were the scholars and guests going to approach it; is there a connection between the two? Is it not another gimmick by Nigerian Breweries Plc to popularize its major brand, Star? These were some of the questions that led one to the 3rd Nigerian Beer Symposium held last Thursday at Eko Hotel, Victoria Island, Lagos.

With ex-governor of Cross River State, Donald Duke; advertising guru, Ted Mukoro; and a professor of applied microbiology, Bartholomew Okolo, amongst others as speakers, one was curious about how they would speak to the theme.

However, before the culture experts and guests had their say, Managing Director of NB Plc, Mr. Nicolaas Vervelde, welcomed all.  He said that the objective of the Nigerian Beer Symposium has been to highlight and share contemporary knowledge on the “wonderful product called beer” and that from previous editions, the conclusion reached is that beer taken in moderation has health benefits. Vervelde, who further noted that beer is one of the requirements in traditional marriages in parts of Nigeria, enjoined all to spread the message of moderation and responsible consumption.

Duke, who chaired the occasion, was the first to highlight how beer contributes to the sustenance of socio-cultural cohesion. The ex-governor, who used various bible passages to show that beer consumed in moderation is not a sin, also highlighted its health benefits. “I have always wondered about the French. Their diet consists of rich, highly fatty foods, wine and those cigarettes. Yet, their rate of heart disease is significantly less than the rest of the world. This has been credited to red wine and the antioxidants it contains, which helps prevent heart attacks. Interestingly, beer has just as many antioxidants as red wine.”

Duke also said beer is a cultural spice that brings the right taste out of all celebrations. “Beer is a drink that has become part of our culture. It has become a near impossible feat today for us as a people to have one form of celebration or the other devoid of beer. The ceremony will not be approved as successful if the variety of foods provided is not complemented with beer.” Like Vervelde, Duke urged people to be moderate and “not drink away their sorrows.”

Professor Okolo, who delivered his paper entitled  ‘Social and Cultural Roles of Beer in Society’ after Tony Agenmonwen of NB Plc had told the gathering the four key ingredients of beer, said that consumption of the product is acceptable in all societies and that beer is the third most consumed after water and tea. The former Vice Chancellor of the University of Nigeria, Nsukka also noted that in all societies, beer plays an important role not only in major life-cycle events, such as birth and death, but also in minor everyday transitions. He said that pubs have been identified as the most important venues for promoting interactions and friendships between people from diverse backgrounds.

Okolo added that alcoholic drinks are a symbolic vehicle for identifying, describing, constructing and manipulating cultural values and interpersonal relationships. He further noted that in all cultures, different alcoholic beverages are classified in terms of their social meaning. Every drink therefore connotes a symbolic meaning and conveys a message.

“In the present day African tradition, beer is a regular feature on the list of items that must be presented at various stages of the marriage process. It must also be present during such other ceremonies as funeral rites, coronations, peace missions, special invitations, among others,” he said.

Mukoro, creator of the original ‘Shine Shine Bobo’ Star jingle spoke on ‘My Beer Experience’. He said that beer is the least alcoholic of all alcoholic drinks, and the healthiest and most nutritious. The man who clocked 80 on the day and downed a can of star right on the stage after his presentation however warned against abuse of beer. “Nothing enjoyable is bad until put to the wrong use.”

Thereafter, Sola Salako, a consumer rights advocate, moderated a panel featuring another advertising guru, Mr. Dele Adetiba, the blogger Noble Igwe and a medical doctor with the Nigerian Army, Ugoh Eronini. They all highlighted the point at which beer became an integral part of Nigerian culture, especially for marriages, births, deaths and resolution of conflicts. They also touched on the economic importance of beer, with Adetiba noting the link between farmers, transporters, the breweries and distributors. Some of the other speakers at the symposium were TV presenter Stephanie Coker, Prof. Innocent Ujah and Azuh Arinze.

I dance to spread joy, well-being and culture —Afrovibes

Praises as ‘best ever’ AFAC ends