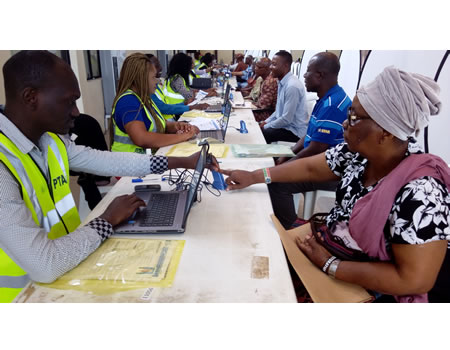 HUNDREDS of retirees on Monday thronged the various verification centres in Lagos for capturing in the ongoing nationwide verification of eligible civil service pensioners under the Defined Benefit Scheme.

The verification exercise being carried out by the Pension Transitional Arrangement Directorate (PTAD), as part of the south-west component of the exercise is expected to capture over 21, 295 pensioners in five centres in Lagos.

The five centres in which the exercise took place include, Alausa, Yaba, Ketu, Amuwo Odofin and Agege.

A Lagos State pensioner with Federal share, Mr Funso Oderemi, who spoke with Tribune Online, after he was verified at the Institute of Chartered Accountant of Nigeria (ICAN) Centre, Kofo Kasunmu Avenue, Amuwo Odofin, verification centre, commended PTAD for the hitch-free exercise.

He said his monthly pension had been stopped since 2010 and that with the verification exercise, he was hopeful to begin receiving his monthly pay.

Oderemi, a retired teacher said: “The problem I had was that my monthly pension had been stopped since 2010. So, I have the opportunity to attend this verification exercise.

“I have shown them all my documents and I have been captured. My expectation is that everything will go on well and I will get my alert, with all arrears,” he said.

He noted that his pension was stopped because he did not participate in the harmonisation of pension exercise then, saying he had sent all the documents to Abuja but was told that he had to wait for the verification exercise, “God sparing our lives, so I am happy to be here.”

When Tribune Online visited some of the designated centres, it was observed that the retirees turned out in their numbers for the exercise at various verification centres as early as 7:30am. The exercise would last till September 29, 2017.

The verification of the pensioners in Lagos, being supervised by the Executive Secretary of PTAD, Mrs Sharon Ikeazor, would be the second phase of the exercise in the South-West zone.

Another pensioner, Mr Bamidele Ajayi, who described the exercise as very smooth commended the management PTAD for putting up a water-tight arrangement for the smooth conduct of the exercise.

Ajayi, said: “The process is very nice and smooth. Once you have your whole documents, you have no problems, in some few minutes you are done.

“The way they do it now is so nice, because the exercise is well coordinated and orderly. It is first come first serve. I commend PTAD,” he said.

PTAD had conducted similar verification of pensioners in Osun, Ondo and Ekiti states in August.

Tribune Online gathered that the Lagos verification was a continuation of similar exercises in four zones of the country involving 64,825 pensioners.

PTAD had earlier announced that the process of verification of the pensioners would consist of four distinct steps of bio data, capturing and provision of other relevant documents.

It said that the entire process was to suitably place the pensioners in the payroll and database for payment of their monthly pension.

It further revealed that sick pensioners would be covered in their locations, adding that a total of 108 PTAD staff were being deployed for the exercise.