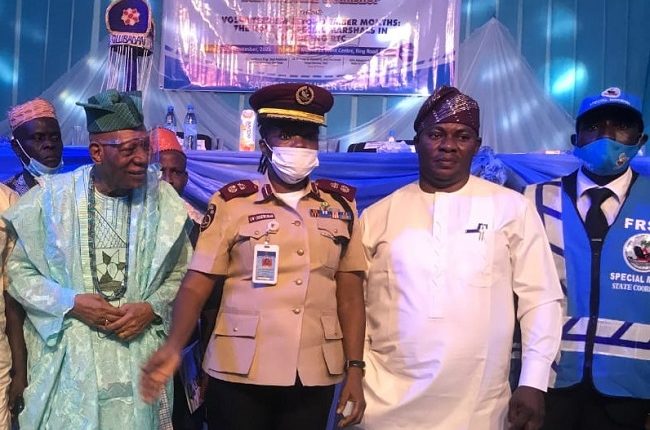 The Federal Road Safety Corps (FRSC), Oyo State Command, has said that 519 road crashes were recorded between January and October 2021, adding that 153 out of the total number were fatal cases, 330 were serious cases and 36, minor cases.

These figures were given by Sector Commander, Corps Commander Uchenna Chukwura, at the FRSC Oyo State 2021 sectoral workshop held at Mauve 21 Event Centre, Ibadan, with the theme ‘Volunteerism Beyond Ember Months: The Role of Special Marshals in Combating Road Traffic Crashes (RTC)’.

She noted that state marshals perform selfless services with no financial benefit and that is why most of them have joined to help in their own little ways and save lives.

Chukwura said the roles of the FRSC marshals in combating RTC are the seven E’s, which are education and enlightenment, encouraging the media, engagement of stakeholders, enforcement of traffic rules and regulations, engineering, environment fixing to ease mobility for other road users and emergency response.

“They are also expected to play vital roles such as the provision of medical facilities or equipment like ambulance patrol vans which will aid FRSC rescue team operation.”

In his address, the governor of Oyo State, Seyi Makinde, who was represented by the chairman and CEO of Oyo State Road Traffic Management Agency (OYTMA), Dr Akin Fagbemi, said the significant role of the State Marshals in ensuring good road usage across the country cannot be overemphasised while advising road users to obey all traffic laws.

“The job of road safety is everybody’s responsibility and thus, shouldn’t be neglected for the government alone and I believe it is out of this commitment that we now have special marshals.”

In his keynote address, the Corps Marshal, Boboye Oyeyemi, who was represented by Assistant Corps Marshal, Emmanuel Abe also commended the special marshals for their work despite not being paid.

Earlier in his welcome address, the State Coordinator of Special Marshals, John Adegbotoluwa, had said that the theme of the workshop was chosen in compliance with the special marshals’ guidelines while admonishing the state governor to provide necessary tools and equipment to assist the special marshals in carrying out their duties.

Verdict: The claim is false. The content of the article published by these online platforms is not new; it has been recirculated several times and has been debunked.Over 500 crashes recorded in 10 months in Oyo ― FRSC

Wike appears in court to testify in libel case against ThisDay