•Sudden Increment Crazy ― Passengers •.We are sorry for the inconveniences ― NRC 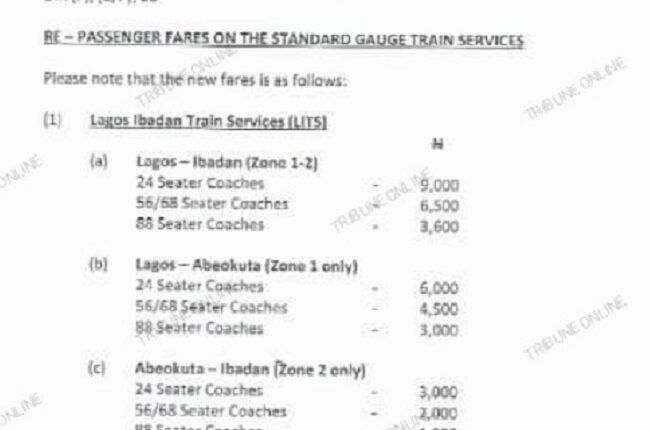 The Nigerian Railway Corporation (NRC) on Sunday issued an internal memo announcing the train fare increment earlier published exclusively by Tribune Online. This is even as some passengers have lamented over the manner of increment, wondering why NRC will jack up train fares without prior notice to train users. 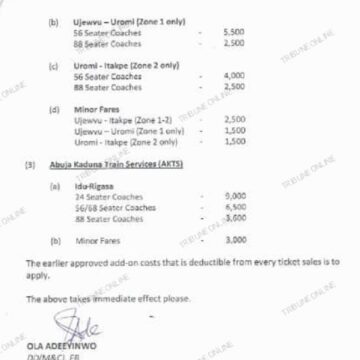 For the Warri-Itakpe train services (WITS), Ujevwu to Itakpe on the 56-seater coaches will now cost N9,000 while on the 88-seater coaches, it will be N5,000.

The NRC stated that earlier approved add-on costs that are deductible from every ticket sale are to apply and that the changes take immediate effect.

However, reacting to the increment, some passengers who spoke with Tribune Online lamented over the manner of the increment by the NRC.

Speaking to the Tribune Online, some passengers who spoke with our correspondent at the Mobolaji Johnson Train Station on Sunday lamented that there was no prior notification about the new train fares before implementation.

“That is why I am so shocked that this new fare regime is taking effect from tomorrow (Monday). How can NRC increase train fares without informing train users? This is crazy,” some of the train users told Tribune Online exclusively.

“Before, we used to inform passengers about any changes in train fares. But this one is sudden because of the way the approval came from the Ministry of Transportation. We are so sorry for the inconvenience,” Augustine Arisa told Tribune Online exclusively.