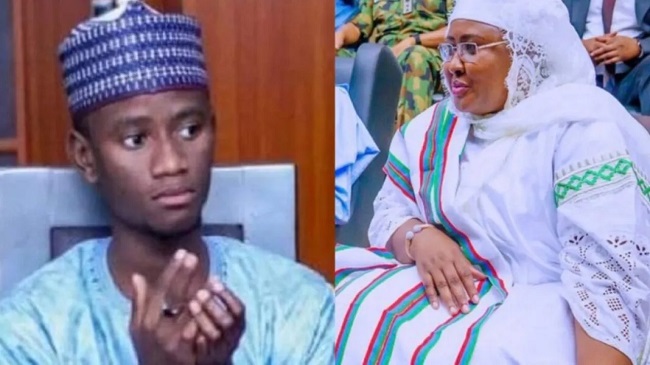 WIFE of the president, Aisha Buhari, has withdrawn the defamation of character suit she filed against a 500-Level student of the Federal University, Dutse, Aminu Adamu, before the High Court of the Federal Capital Territory (FCT).

Adamu was arraigned on Tuesday before Justice Yusuf Halilu by the FCT Commissioner of Police following a complaint by Mrs Buhari over a tweet by the defendant on a one-count charge bordering on defamation of the character of the president’s wife.

He pleaded not guilty to the charge and was subsequently remanded at the Suleja Correctional Centre in Niger State by the judge, pending hearing of his bail application.

The matter took a happy turn for Adamu on Friday at the hearing of his bail application when the prosecution counsel, Fidelis Ogbobe, informed the court that the president’s wife had decided to withdraw the case against the defendant following the intervention of well-meaning Nigerians.

Based on the development, Ogbobe then applied for the withdrawal of the case, hinging the application on Section 108 (2) (a) of the Administration of Criminal Justice Act (ACJA), 2015.

Ruling on the prosecution’s application to withdraw the case against Adamu, Justice Halilu commended Mrs Buhari for her gesture.

The judge, however, admonished parents and guardians to monitor their children and wards.

He thereafter discharged the defendant.

Adamu’s travails began in June when he tweeted on his Twitter handle, @aminullahie Catalyst, in which he screenshot Mrs Buhari’s image and wrote in Hausa “su mama anchi kudi talakawa ankoshi”, meaning, “mama has eaten monies meant for the poor to satisfaction”.

Following the president’s wife’s complaint, the police traced Adamu to Dutse, Jigawa State, five months after his tweet and arrested him on the premises of the university, brought him to Abuja and allegedly drove him straight to the Presidential Villa, where he was allegedly beaten and tortured.

His arrest and alleged torture on the instructions of the president’s wife were greeted with outrage from Nigerians, prompting the National Association of Nigerian Students (NANS), the umbrella body of Nigerian students, to first apologise to Mrs Buhari for Adamu’s indiscretion and pleaded for his release.

The body, however, later threatened a mass protest by students against Mrs Buhari pending when Adamu would be released.

The planned protest was scheduled to commence on Monday.

Experts brainstorm on how to use improved water, sanitation to tackle diseases, mortality