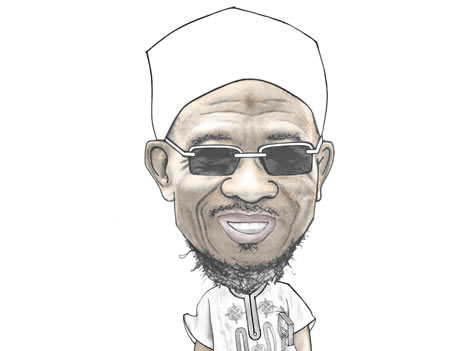 Progressive thinking and development, which are the foundations of a better tomorrow, often face the worst of criticisms from those bent on maintaining the status quo, mainly the elites of society. They want their privileged positions maintained, while the downtrodden continue a life of squalor. Of course, progressive thinkers are usually few. Fewer still are the thinkers, who put their beliefs into deeds, with many progressives being scared of what the elites would do to them in the public space and a few of such progressive thinkers joining the elites after getting to the ‘top’.

But there are others, who style their beliefs, progressive, and regularly attack the doers of what they purport to be progressive thinking. These pseudo-progressives often laced their writings with ‘facts’, deploying enormous propaganda to sway the most ardent of men, who believe that the society ought to be developed. Some would argue that such pseudo-progressives do not have a deep understanding, thus behaving like backslidden Christians. For me, they do have quality understanding, not the other way round.

However, what many fail to see is what the Yoruba describe as ‘ilara’ (envy). They are envious of those who put their beliefs into practice. It is for the same reason Yoruba would say, ‘ija ilara kii tan boro’ (an argument/quarrel with roots in envy cannot be easily resolved). It is in these lights one would situate the perennial attacks against the former Governor of Osun State, Ogbeni Rauf Aregbesola, who is now Nigeria’s Minister of Interior. Everything has been done to destroy him politically. But like the legendary Phoenix of ancient Greek folklore, Aregbesola has continued to confound his traducers by not just surviving every attempt to put him down, he continues to win accolades.

Writing in The Cable on March 8, a friend and colleague, Festus Adedayo, feasted on the reversal of some educational policies put in place through Aregbesola by his successor, Mr. Gboyega Oyetola. Not once in the piece did my friend consider a political angle in his article or the disservice to Osun State through a vindictive move by a governor, who naively believe his predecessor did not support his emergence, thus must be cut down.

In the article in question, my friend also did not inform his readers that Oyetola, as Chief of Staff, was the ‘Prime Minister’ of Osun State, while Aregbesola was in office. Nothing gets done without Oyetola’s signature to the extent that the Secretary to the state government became a figure head with today’s governor carrying out the responsibilities of the SSG. There was no policy initiated in the state Oyetola was not among the key actors. But more on this at a latter date, because Adedayo appears blissfully unaware of the political side playing out in the current Osun State drama.

And, to think that Nobel Laureate, Professor Wole Soyinka, among other notable Nigerians, was involved in putting together the now discarded policy, you would think these noble Nigerians got it wrong. Meanwhile, it is a vindictive Oyetola at work, and no amount of statistics to the contrary can convince the naysayers. A number of international organisations also made inputs and lauded the initiative to wean Osun State from Nigeria’s unproductive educational policies. But it is clear we’ll continue to have disciples of those who for personal political reasons, seeking to destroy quality legacies that should help not just that state, but the Yoruba race as a whole.

Adedayo was carried away by emotions, due to the underground moves to nail Aregbesola, an initiative of minions envious of his political profile. Now, to my friend’s claims: One of my former schools, Zumratul Islamiyah Grammar School, Igbogbo, Ikorodu, was a boys only school shortly before I left for Gaskiyah College, Badia, Ijora, Lagos in 1981. Being a public school after Alhaji Lateef Kayode Jakande became governor of Lagos State, it became a mixed school with girls being admitted. So, Adedayo’s argument painting Aregbesola as the first to do this is wrong. Jakande did it in Lagos, based on his political convictions. In fact, a mischievous student through the parents can even take action against a state Government in today’s Nigeria for discrimination. Such a student can claim discrimination, when the school closest to his/her house is a single-sex one, in a place where we want students to school not far away from home.

At Gaskiyah College, which was known all over Lagos for its traditional mode of dressing, Alhaji Jakande’s government did not only change our uniform to an English one, but also partitioned the school into I and II. Later, School II was renamed Cardoso High School. And both were occupying the same premises. There were several cases like this in Lagos between 1979 and 1983. And Adedayo pontificated that changing the names of schools that have been in existence before the birth of the Lord Jesus Christ should not be considered at all. That is a fallacy. Jakande did exactly that in Lagos.

Adedayo, the school structures you dismissed should have been applauded. That of Borno State is being celebrated. In Ogun State, the uncompleted model schools built by the former Governor Ibikunle Amosun were celebrated to no end. Aregbesola remains the only governor in the entire South-West who not only initiated these superb structures, but also completed same and on time. The initial cost of Amosun’s model schools was N1.5 billion for each one. And they are nowhere near what Aregbesola built in Osun State. Before Aregbesola left office, he built 20 elementary and 22 middle schools. Each school has a capacity for 1,000 students.

Eleven high schools were built by the same Aregbesola with each of these schools having capacity for 3,000 students. Which state in the South-West did that during the period in question?

Osogbo town alone has three newly built high schools because statistics showed that the town has a population of 15,000 high school students. Aregbesola’s original design was for five of such schools to be built in order to maximise resources in a state with limited funds. With a capacity of 3,000 for each, the five schools would have absorbed all the students. One of the two outstanding today was designed to be named after Asiwaju Bola Tinubu. Land had already been secured, if the current administration should continue with the laudable policy. But it is possible these standard schools will be demolished to accommodate those coming from Mars, all in a bid to paint Aregbesola with a tar brush.

Aregbesola’s background and ideology differs from that of Oyetola. A progressive thinker in words and deed, he continues to walk the talk we’ve known him with since the 1980s, when our paths first crossed. When Great Awo started free education, he was also called names with articles like Adedayo’s written to destroy the man. A number of gullible poor people were engineered by the same elites who were oppressing them to openly campaign against Awolowo’s educational policies.

Oh, prisoners often fall in love with their chains. Jakande was called names when he was in office too. We were called poultry shed students by the opposition National Party of Nigeria (NPN), with Jakande’s education policies being derided, as Adedayo is doing now. But glory be to God, because we turned out to be quality students. Students in Osun State, whose WAEC fortunes have improved due to Aregbesola’s education policies will have loads to write in a few years’ time, just as son of man is writing about Jakande’s. The Oranmiyan initiative cannot die. Reactionary responses are certain to come. But they have never been able to outlast quality progressive works.

Of relief and outrider