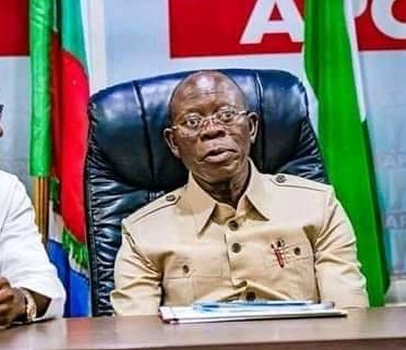 The National Chairman of the All Progressives Congress (APC), Adams Oshionhole, has dismissed the protest of the Ekiti State chapter of the party over the appointment of former Oyo State governor, Senator Abiola Ajimobi, as the Deputy National Chairman (South), saying that the majority of the South-West had their way on the matter.

The party in Ekiti State had protested against Ajimobi’s appointment to replace the previous occupant of the post, former Ekiti State governor, Chief Niyi Adebayo, who was appointed the Minister of Trade and Investment.

The state APC had announced its preference for Senator Gbenga Aluko to replace Adebayo as the Deputy National Chairman (South),

But after presenting Ajimobi to President Muhammadu Buhari at the presidential villa, Abuja on Friday, Oshiomhole prevented Ajimobi from answering the question thrown to him on the matter, saying that it was unfair to ask the former Oyo State governor the question.

He however maintained that five of the six states in the South-West endorsed that choice of Ajimobi for the post.

Oshiomhole stated: “I don’t think it’s fair to put this question to him (Ajimobi). We are in a democracy, we have six states in the South-West, and this position is zoned to the South-West.

“The South-West has met, and there were five states in support and one state (Ekiti) opposing both at governorship level and at the party’s structural level.

“The name of the game is, like the Ekiti State Chairman has, said, ’minority will have their say’ and he has enjoyed that right to have his say, but he can’t prevent the majority from having their way. I think that is it.”

The party boss also explained that he was at the presidential villa to present Ajimobi to the president after the former governor’s nomination by the South-West.

He said: “Of course, the president already knows him (Ajimobi’s). He hosted us a couple of times when he was governor of Oyo State and played a pioneering role in the formation of the All Progressives Congress.

“Obviously, he is not a stranger to the president. It’s just a way of formality that I have to present him.

“The president was delighted that someone with his background – a complete gentleman, he has been in the oil industry, a senator and a two-term governor…so he will bring on board a wealth of experience that will help to reinforce the quality of leadership of the All Progressives Congress.”