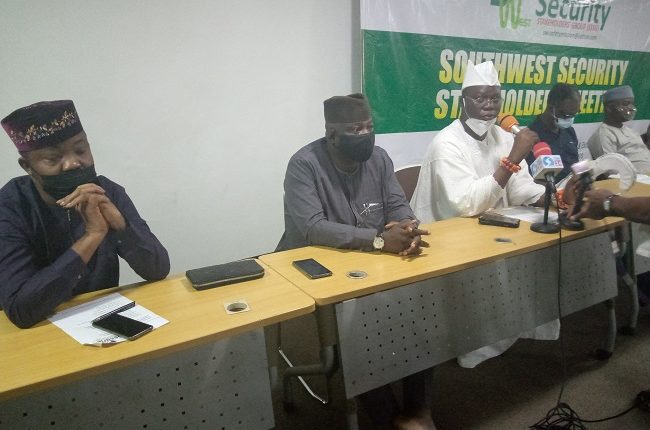 The Southwest Security Stakeholders’ group and Afenifere, a Yoruba Socio-Cultural group, on Friday, called on President Muhammadu Buhari to prove his innocence by publicly condemning the carnage, armed banditry and other nefarious acts being perpetrated by Fulani herdsmen across the Southwest region.

The traditional security groups, comprising Oodua Peoples’ Congress, Agbekoya, Hunters’ Group, Isokan Ile Yoruba, Vigilante Group of Nigeria (JAHUN), Ibarapa Group and Community Society Awareness Initiative, at a stakeholders’ meeting initiated and chaired by Aare Ona Kakanfo of Yorubaland, Iba Gani Adams, and held at the Lagos Chamber of Commerce conference hall, Ikeja, Lagos, jointly condemned armed banditry and invasion of the Southwest by Fulani herders and implored the government to address the situation before it descends into a state of anarchy.

Speaking on the heels of the statement credited to the country’s Chief of Defense staff calling on the people for self-defence, Secretary, Afenifere, Mr Yinka Odumakin said the Defense Forces of Yoruba land are ready to defend Southwest against aggressors.

Incessant killings of Yoruba by the Fulani in the Southwest must stop. About two years ago, a daughter of  Afenifere leader was killed. An Oba was killed and so many leaders across the Southwest. We remember Dr Aborede from Ibarapa who was killed by Fulani herders like an animal. The recent onslaught was in Shasha, Ibadan where our people were molested. Yoruba people don’t molest others. We are peace-loving people. There is a saying in Yoruba that goes, “when you are in a city of lepers, you fold your arms so that you look like them.”

We don’t cause insecurity to others. But of late, people have been provoking us on our lands. We are using maturity because we don’t want any breakdown of law and order. At this stage, however, we have to appeal to the Aare Onakakanfo, Yoruba war leader that war is at our doors.

About two weeks ago, Prof Wole Soyinka also said war is already at our door. Two days later, they invaded and ransacked his home in Abeokuta. Our Nobel Laurette means nothing to the Fulani herdsmen while no Yoruba man will ever dare to molest a person of Prof Wole Soyinka’s status in Hausa or Fulani land. We have great respect for other people but we are not respected in our land. We are treated anyhow.”

Earlier in his opening remark, while explaining the intent of the security meeting, Iba Gani Adams hinted that it was prompted by the urgent need to protect the Yoruba nation from external aggression.

He said, “On Sunday morning, I received some leaders of Yorubaland in my house. We discussed insecurity in the Southwest and they said in my capacity as the Aare Onakakanfo of Yoruba land, I have to summon all the traditional security organizations to hold an important meeting on how to secure our land.

“Yoruba leaders believe that no society triumph without the support of relevant security organizations. This is the main reason we are gathered here today. It is to lend our voice and support to the frequent attack on Yoruba land and proffer solutions.

“We believe at the end of the meeting, we will formulate strategies and gather intelligence to complement the efforts of State and Federal Security agencies.

“The Southwest Security Stakeholders group has been in existence for over a year but its operations have been hindered by the COVID-19 pandemic.

“Meanwhile, we urged our Obas and traditional leaders of Yorubaland not to hesitate to invite any of the groups listed above in the event of any threat to the security of any Yoruba person by invading groups anywhere on our land.”

Having reviewed the security situation in the country and in Oodua land, in particular, Stakeholders back Amotekun, the southwest Security Network while also calling on the Federal government to, as a matter of urgency, arrest the apparent insecurity before it degenerates into anarchy.

They also reiterate the call for a return to pure federalism which, according to them, was the political arrangement endorsed by past leaders of the nation at independence.

They said it will allow various nations in the country to take proper control of their affairs including security.