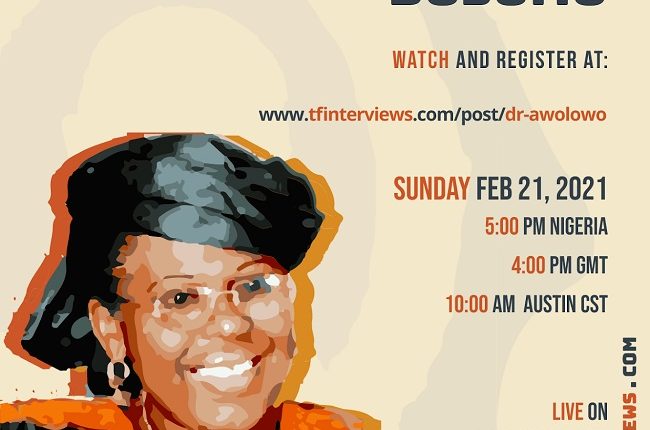 Federalism, familism, and futurism: Dr. Tokunbo Awolowo Dosumu and the legacy of Awoism

Looking at the lives of great men of mosaic statures all through the ages, one would find the truth in the aphorism that leaders are born and not made. An average person’s day-to-day living experience is a complicated web of insatiable expectations and unending efforts that take an equally complex but pragmatic hand to manage. All over the world, and at different times, leaders have strategically emerged among cultures and nations to salvage this complex mix. Outstanding in thoughts and character that eventually spring them to the degree of apotheosis among their followers, leaders are immortalised and worshipped in the minds of people. They are believed to have reached the limits unspoken or unheard of, at least in the contemporary history of the people. By implication, they are believed to be a white tiger that shows up only once in a long wild while. This explains why leaders are often mythologised. In the process, their human flaws are tinted with their humane forms and derivatives that, in the end, the people return them to their commitment to the human cause in modeling and animating an identity of perfection and the extraordinary.
Since they emerge out of the blues to salvage a particular situation among their people, bequeathing this heritage and image on their children has always been the most daunting aspect of their mission. Yet, the traditions, principles, and visions they stand for have to be carried on to the future—far beyond their generation—for the effective transformation of the society. The importance of legacy in this situation is dire because these leaders are reminded continuously, or indeed confronted, with the reality that a desirable modification of the human condition and society is an empire-building process that takes time and consistent energy, directed at laying each block deliberately and carefully. Then comes the reality that leaders are made, as they often find out that leadership designs and missions are beyond the advantages of birth. This way, who inherits any aspect of their visions and traditions is beyond their calling. Of course, we see this play out whether in the case of the great prophets and men of old whose ideas and teachings have informed the basis of state laws, jurisprudence, human conduct, or in contemporary leaders of political thoughts and philosophy.

But it is always the joy of parenthood, especially in Papa Awo’s part of the world, to see one’s children take after the path of light ushered with the whole of our energy and being. For children to become the embodiment of their parents’ ideals, especially the virtues of humanity, wisdom, and hard work, which the Yoruba would philosophise in the idea of Ọmọlúàbí, remains the most valuable heirloom to be endowed on any child. It is also the greatest blessing a man could receive from his creator. Accordingly, the Yoruba people would add that Tiiná bá kú á fi eérú bo’jú. Literarily put: “When a fire goes off, it covers its face with ashes.” However, the current age’s unbridled individuality has worsened the relationship between the fire and the ashes, to the extent that the latter is quickly blown off the air, leaving the fire without an enviable trace. Meanwhile, leaders are parents, the kind that transcends biological relations to followership.

Following Oduduwa, Obatala, Ogun, and other revered characters in the Yoruba mythologies, legends, and social constructs that unified the Yoruba nation and concretised the Yoruba identity, Chief Obafemi Awolowo was elevated by his people (and by honest and objective folks outside his ethnic group) to the status of the only Nigerian president without an office. Awolowo came when the people needed a break from the excruciating hardship of modern slavery called colonisation. He left with the title of the Grand Commander of the Federal Republic (GCFR) without taking office as a president of the Federal Republic of Nigeria, even though he tried vigorously. That Awo never ruled Nigeria as a president is a testament to the fact that sometimes the greater good is served at the lower deck. This, for him, would be the lower desks of the opposition, party leadership, premiership, and cabinet membership. In all these circumstances, Awo steered the course of his region skillfully that you quickly forget he was ahead of the state and government of Nigeria. Over three decades since his transformation, the nation has been reverted to a severe drought of functional ideas.

But while we wait for this drought to be over, Awo has been remarkably immortalised, not only in his public works but in the private as well. The idea of Awoism remains the yardstick through which political leaders in the southwestern part of Nigeria measure and package themselves to their constituencies. Awoism, in this part of the country, plays the same role as democracy in global politics. Graciously, the fear that this idea could be bastardised by political actors laying claim to it has been alleviated through the agency of his children. The Obafemi Awolowo Foundation (OAF), established and managed by his family, has ensured the protection of the sanity of that idea.

Born as the last of five children, Dr. Olatokunbo Ayoka Awolowo Dosumu, the current Executive Director of the OAF, remains the only person alive from that generation in the immediate family. On every scale, she comes through as the true embodiment of Awolowo, except for his political sagacity and command. A writer once described her as: “Extremely decent, soft-spoken, reserved, compassionate and kind. Courteous, courtly, and civil. Hardworking, tireless and courageous. Always cool, calm and controlled. She is always monochromatically focused. Gifted with a heart of steel shrouded by an outward succulent class, she is driven, determined and dependable. A time-tested crisis manager with unmistakable mild mien, who is fair-minded and balanced.” Dr. Awolowo Dosumu is a UK-trained medical doctor with vast experience in the public and private sectors. She practiced medicine in the UK and Nigeria, and was appointed by the Olusegun Obasanjo’s government as Nigerian Ambassador to the Netherlands between 2000-2003.

On the shoulders of Dr. Awolowo Dosumu falls the heavy burden of rekindling the Awo spark in the Nigerian polity. It is not only true that everyone attests to it that she has been doing well on this, but “by their fruits,” as the scriptures remind us, “we shall know them.” The instance of the African Newspapers of Nigeria PLC’s survival and place in the turbulent Nigerian media history is enough for any doubting Thomas. Under her watch, both the foundation and the company responsible for the Tribune titles have grown exponentially. Many Nigerians who have lived long enough can count, on their fingertips, the number of newspaper publishers who have graced the Nigerian media industry stage in the last decades and the ones still in existence to-date. Certainly, not many. The African Newspapers of Nigeria PLC, under this visionary woman’s leadership, is a trailblazer in this respect.

Dr. Awolowo Dosumu is a medical practitioner and a diplomat, politician, philanthropist, administrator, mother, and teacher. Like her father, the sage figure with cult following, she is a strong advocate of good governance through federalism. Through conferences and seminars (some of which were organised by the Obafemi Awolowo Foundation), policy documents and research, and other public engagements, she has never shied away from a discussion about her father’s cardinal philosophy, Awoism, alongside government investment in social welfare.

Making inference from a Singaporean experience, in one of her recent public engagements, she argued that leaders should not be “elected based on their political strength, influence, economic power, and popularity rather than on merit and ability to lead the people.” The picture she painted here is a semblance of the circumstances that kicked her father off the presidency track he had so much wanted and seemingly prepared for. The same system also has shut her off the political grid in Nigeria. But like her father, she believed that under the right circumstances, she could do outside of the grid just as much as she could do within it. For her, the end justifies the means; after all, it’s the impact on the people that matters.

Dr. Awolowo Dosumu exhibits an economist’s character as she has constantly demonstrated the ability to recognise and annex resources for tangible outcomes. Take the instance of her view on restructuring. On this matter, she’s about the only person who has clearly brought to the fore, the bridge between the economic independence of Nigeria federating units and the vast population of over 200 million spread over 923,768km landmass. “The size of Nigeria,” she noted, “will work for us because trading between ourselves and all the rest of the country will benefit every part of Nigeria.”

A couple of weeks back, the African Intercontinental Free Trade Agreement was officially put into action. This is expected to see Nigeria and other 54 states in Africa collapse their (economic) boundaries in the coming months and years. Nigeria, being the most populous and most prosperous country in Africa, was initially reluctant to join the continent-wide initiative. But this reluctance has not been put into actionable plans to revive the country’s production capacity and give it leverage for access to the largest free trading bloc in the world. With a viable and healthy competitive market fertilised within each state’s enclave in Nigeria, which can be engineered by reordering its current patriarchal structure of administration, it is expected that Nigeria is well-positioned in this bloc and in its relations with the rest of the world. How best can the memory of the country’s founding fathers, one of whom Dr. Awolowo Dosumu is a respected protégé, be better served despite their challenges and limitations at putting the country on the right footing?

In 1956, when Queen Elizabeth II visited Nigeria, she was among the schoolgirls who presented the Queen with a flower. This is an experience that is rare and historic. Ostensibly, some aspects of her knowledge of the post-colonial Nigerian state might differ from that of others. This interest is weaved alongside her views on the country’s current political situation and the efficacy of Awoism in salvaging the situation. In the next Toyin Falola Interviews, Dr. Awolowo Dosumu would be engaged on topics related to the Nigerian post-colonial experience from the vantage point of a daughter who grew with one of the major actors in the post-colonial order of politics in the country. The interview will be an opportunity to garner knowledge from the last scion of Chief Obafemi Awolowo’s immediate family in the coming days when she will also clock 73.

Register and watch at:
https://www.tfinterviews.com/post/dr-awolowo 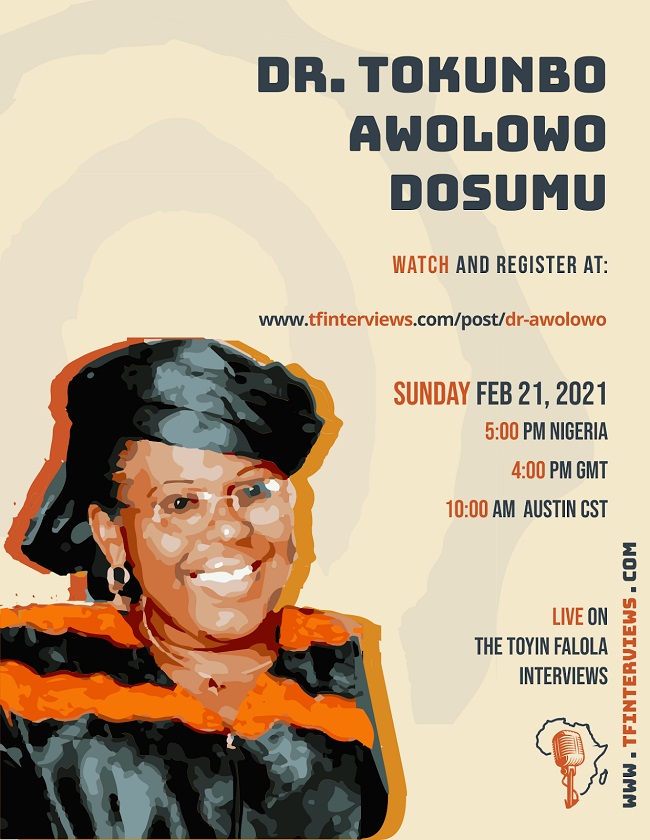