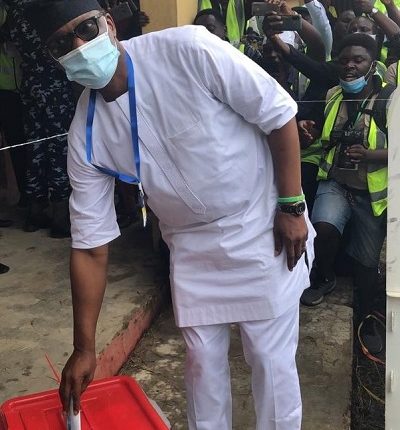 The Peoples Democratic Party (PDP) candidate in the ongoing governorship election in Ondo State, Eyitayo Jegede, SAN, on Saturday condemned the conducts of the policemen drafted to maintain peace and orderliness at the various polling units during the election.

Jegede gave the knocks while reacting to the lackadaisical attitudes of the policemen while some persons were committing electoral infractions with impunity.

According to him, while the voters displayed a high level of civility, same could not be said of the policemen, whom he accused of doing nothing while infractions were being committed under their watch.

“I will rather talk first about the voters. The voters have been orderly, they have been peaceful; they have been conducting themselves very well. On the party of the security agencies, I must say I am disappointed at some of the officers there, a little bit disappointed. Because you have an officer standing directly behind the person casting his vote and you have them giving allowance to persons who should not be there, giving signals to some people in their presence, until I protested,” he noted.

The senior legal practitioner equally faulted INEC and decried a situation whereby his voter’s card and that of his wife could not pass through the card reader and they had to wait for the malfunctioned card to be rectified before voting.