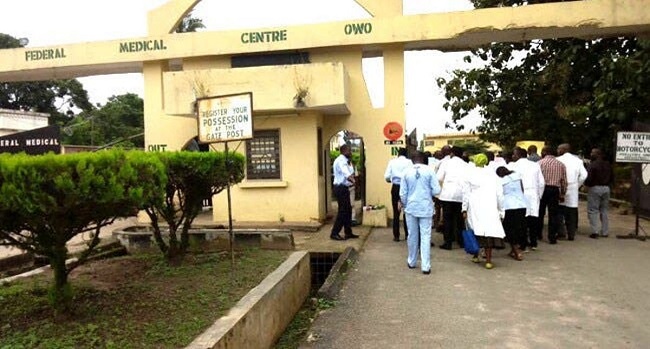 Nurses under the aegis of National Association of Nigeria Nurses and Midwives (NANNM) at the Federal Medical Centre, Owo, Ondo State, on Monday protested over the attack and beating of some of their members by relatives of a patient admitted at the hospital.

The nurses who threatened not to return to their duty posts until the perpetrators are arrested, brought to book and adequate security is provided for them by the management of the hospital.

Speaking, the branch Chairman of NANNM at the FMC, Owo, Mr Francis Ajibola, who condemned the attack on the nurses, explained that a COVID-19 patient was admitted into the hospital on Saturday evening gave up in the early hours of Sunday.

According to him, the patient had some underlying ailment and was brought to the hospital late with COVID-19 case, while the doctors and the nurses on duty tried to revive the patient.

He, however, said the relatives of the dead patient felt dissatisfied with the development and descended on the nurses on duty leaving two of the nurses in critical condition and one other injured. He added that none of the nurses could eat.

Speaking on the protest, he said the nurses are not on strike but “we are just trying to condemn the barbaric attitude of some patients relatives on our members.

“You know how COVID-19 works especially with patients with an underlying ailment, so the patient died and the children of the patient said that the patient should not die. We felt for them too, we care for life but we cannot give life, we only care but they refused to understand that.

“They took to violence, brutalising nurses, dragging nurses on the ground, pulled off their hair, fractured their bones, marched on them. This is very embarrassing and nobody will ever support that kind of barbaric attitude.

“That’s why we are just making the solemn demand, we are not fighting the management but to appeal to them to provide adequate security for our members so that people can come back to work.

“We are not on strike, we just withdrew the services of our members until security is provided and that the persons that perpetrated the act be brought to book and prosecuted in order to serve as a deterrent to others. That’s just our simple demand.

“Some of the injured nurses are still on admission and in pains now, with injury all over their bodies. So we want the management to provide security for us and punish the offenders. That’s just the simple things we are demanding.”

The Chief Medical Director of the hospital, Liasu Ahmed, confirmed the development but said the hospital has not been shut down, adding that the nurses are demanding for better working conditions especially on security but said an investigation has been launched into the attack.

He said: “It is true that some of our nurses were attacked by the relatives of some patients. We are currently investigating the matter.

“Contrary to fake news spreading around, we have not shutdown out hospital. We will ensure that our staff are well protected.”

Another six killed by herdsmen in Plateau

Accident claims one life, others injured in Bauchi