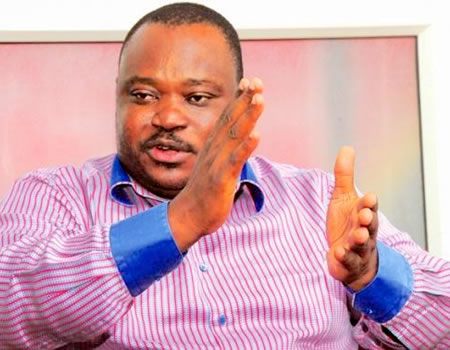 Business mogul and politician, Mr. Jimoh Ibrahim, has described the opposition party in Ondo state, the Peoples Democratic Party (PDP) as drowning political party and jittery ahead of the forthcoming governorship election in Ondo state.

Ibrahim who stated this while speaking to newsmen after his defection to the ruling All Progressives Congress (APC) said the dwindling fortune of the PDP in the state was an indication that the party cannot win the forthcoming governorship election in the state.

He said the party never shown seriousness towards winning back the state, saying “the hue and cry of PDP in Ondo state is synonymous with the death gasps of a dying man who is at the end of his tethers”

He said, though the party deserves empathy of all well meaning Ondo state people, but said the coffin of PDP would be nailed during the october 10, gubernatorial election in the state.

“PDP’s cry to death is not new to me,” Ibrahim said excitedly. “As far as PDP is concerned in the Sunshine State, it is a dead party.

“The expected date of its burial is October 10th, 2020. Unfortunately, the dying party has no successor, so chances are it will die a natural death in Ondo state unsung.”

He expressed confidence that governor Rotimi Akeredolu will emerge as the governor of the state in the election, predicting that PDP will come a distant third at the poll.

He noted that since PDP crashed out during the 2016 governorship poll, the party had lost its election operational data and ever since, the party had behaved like it is marooned in a political wilderness.

He said PDP appeared to always to make political mistakes that make them appear not cut out for political leadership in Ondo state.

“Take for instance, in the last primary of the jaded party, a serving governor from another state brought a hundred million cash to support one of the aspirants, otherwise, the party may not even have had a candidate.”

He dared those supporting the PDP to bring all their resources to the state for the October gubernatorial poll, stressing that it would amount to waste as Akeredolu is set to win the poll with a convenient lead.

He assured the governor of his support and expressed optimism that APC will win the forthcoming governorship election in the state.

Our mandate is to reduce crashes, fatalities by 35% on Nigeria roads ― FRSC