On ban of SARS 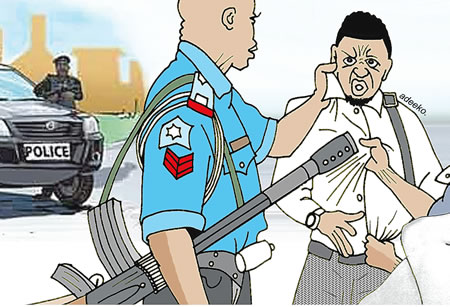 I must commend the Inspector General of Police Mohammed Adamu for taking a bold step in announcing the ban of Federal Special Anti-Robbery Squad (SARS) and other unlawful acts of those supposed to protect the citizens but are using their position and uniforms to harass and intimidate people.

The abuse of human rights has become the order of the day by SARS operatives and I wonder if they believe they have or respect the order of their boss because some of them still go patrolling after previous bans were announced.

On the issue of roadblocks, I remember vividly a past IGP also banned roadblocks across the country but all to no avail and you heard some of the police officers saying the ban won’t last and it didn’t last. They are not above the law and must respect the laws of our land.

My candid advice to the Inspector General of Police is to walk his talk so that his name will be written in gold that he banned SARS due to their unlawful act and the way they maltreat the people. Is Nigeria not our country again? They see themselves as superior to others forgetting that people only respect their uniforms.