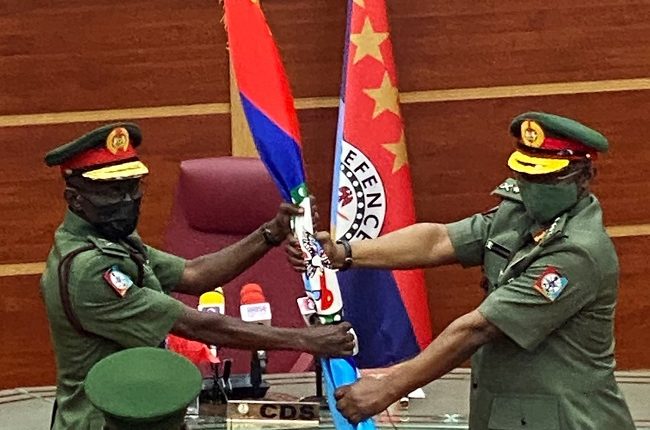 The outgoing Chief of Defence Staff, General I Olonisakin while handing the mantle of leadership to him, urged Gen Irabor to ensure that Nigeria remained one united country.

He tasked Gen Irabor to give his best to ensure that “Nigeria remains one peaceful, indivisible country.”

While highlighting the achievements of the military in the last five years, the outgoing CDS said: “I must state that while the Armed Forces of Nigeria, under my leadership, grappled with some operational and logistics challenges, the DHQ has made some modest achievements aimed at improving operational capacity, logistics and welfare needs of officers and men serving in the Defence Headquarters.

“In terms of organisation, some directorates of the DHQ were upgraded to departments to make them more impactful. Some of these are the former Directorate of Civil-Military Affairs, which have been upgraded to a Department to scale up our non-kinetic operation.”

“I urge you to continue to give your best to ensure that Nigeria remains one peaceful, indivisible country.”

In his remarks, Gen Irabor solicited the support of Nigerians to tackle the current security challenges, adding “we are all aware of the security landscape and should join hands to take security to all the nooks of the country.”

Gen Irabor who promised to offer the right leadership that would inspire the Armed Forces thanked President Muhammadu Buhari for considering him worthy as the Chief of Defence Staff amongst the lots.

The surprise visit made on Friday night by the leaders of the ruling All Progressives Congress (APC) to former President Goodluck Jonathan at his residence in Abuja triggered a stir in the major political camps, resulting in at least four possible theories..Olonishakin hands over  Olonishakin hands over