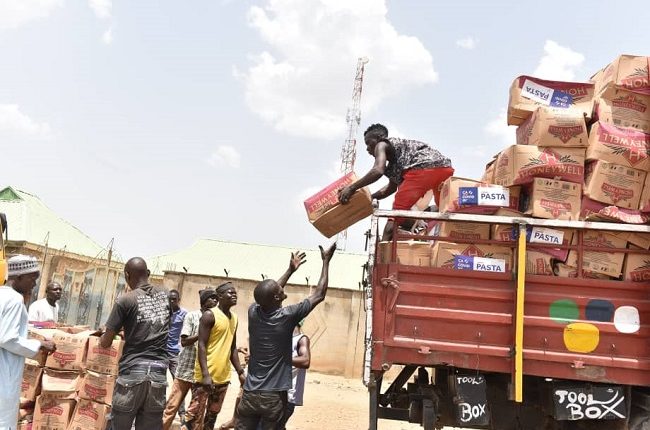 In line with Governor Inuwa Yahaya’s directive, the two communities of Nyuwar and Jessu in Balanga Local Government area have received delivery of relief materials to cushion their sufferings following the recent attacks on them which claimed many lives and left much property burnt down completely.

While Presenting the food items and other essential materials to the representative of the district head of Nyuwar, the Commissioner of Internal Security and Ethical Orientation, Adamu Kupto said having visited Jessu and Nyuwar communities to assess the level of damage, the Governor of Gombe State expressly approved the delivery of relief materials to alleviate the sufferings of those affected.

Flanked by the Commissioner of Special Duties, Christopher Maisheru, Adamu Kupto said the food items provided were meant to address the immediate needs of the people as government mobilises resources for yet another intervention.

He assured the people of Nyuwar and Jessu communities that the administration of Governor Inuwa will continue to work with security agencies to ensure that perpetrators of the carnage are brought to justice.

While condemning the senseless killings and destruction of property in their entirety, the Commissioner of Internal Security and Ethical Orientation called for maximum restraint from both communities in order to de-escalate the tension.

The representative of the district head of Nyuwar, Mr Yohanna Pisagih who received the items on behalf of the community, thanked Governor Inuwa for responding in record time to the plight of the people.

The Commissioner of Internal Security and his Special Duties counterpart were also in Jessu to present relief materials to the victims. The Galadiman Jessu, Mr Goma Jesimel who stood in for the district head, received the items on behalf of the community.

Maisheru in his remark at Jessu,  said the earlier visit by Governor Inuwa and the speed with which he approved the delivery of relief materials show his compassion and emotional attachment to the people.

Responding, the Galadiman Jessu Mr Goma Jesimel thanked the state government for promptly responding to the plight of the people of Jessu and their brothers in Nyuwar.

He wondered why their communities were attacked without any provocation, appealing to Governor Inuwa to ensure that justice is served to any person or group of persons found to have engaged in or sponsored the carnage.

He equally expressed gratitude to the Governor for the deployment of security forces to restore law and order in both communities as contained in a statement by Ismaila Uba-Misilli Director- General, (Press Affairs) Government House.