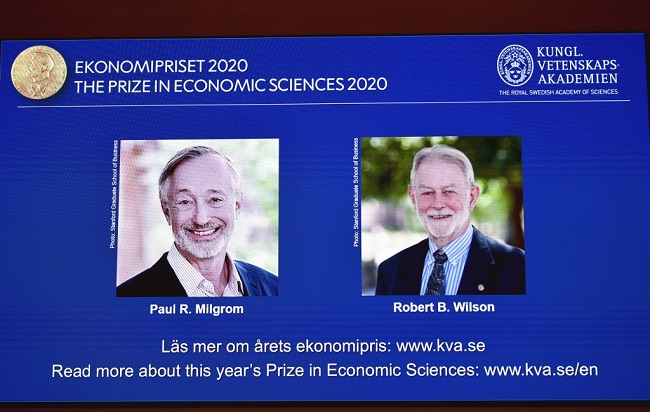 Milgrom and Wilson, who are both professors at Stanford University in California, were recognized for theoretical discoveries that improved how auctions work. According to the Royal Swedish Academy of Sciences, they also designed auction formats for goods and services that are difficult to sell in a traditional way, such as radio frequencies.

“This year’s Laureates in Economic Sciences started out with a fundamental theory and later used their results in practical applications, which have spread globally. Their discoveries are of great benefit to society,” Peter Fredriksson, chair of the prize committee, said in a statement.

According to the Royal Swedish Academy of Sciences, the economists invented new formats for auctioning many interrelated objects on behalf of a seller motivated by doing good for society rather than simply achieving the highest price possible.

In 1994, US authorities first used one of their formats to sell bands of radio spectrum. Doing so helped ensure that taxpayers were benefiting from the sale of radio frequencies that were owned by the government but of enormous value to mobile network operators.

The prize for economics is officially known as the Sveriges Riksbank Prize in Economic Sciences. It was established by Sweden’s central bank and has been awarded since 1969 in memory of industrialist Alfred Nobel.

In 2019, the economics prize was awarded to Abhijit Banerjee, Esther Duflo and Michael Kremer for their work to alleviate global poverty. Duflo, a professor at the Massachusetts Institute of Technology, was the youngest person and only the second woman to be awarded the prize.

Last week, the World Food Programme was awarded the 2020 Nobel Peace Prize for its efforts to combat hunger and its “contribution to bettering conditions for peace in conflict-affected areas.”