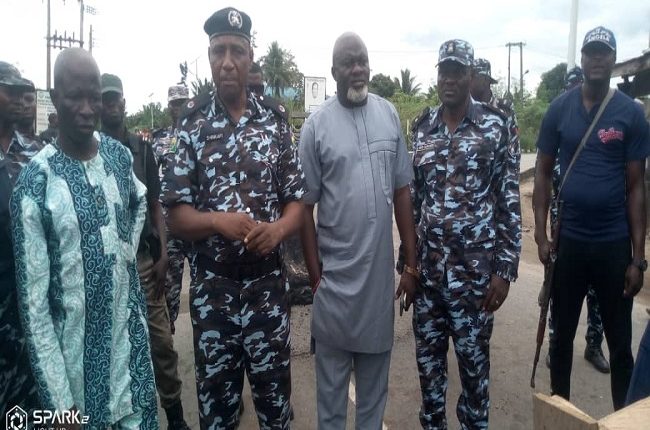 IRKED by the renewed crisis in Evwreni Community in Ughelli North Local Government Area Delta State, the Delta State Commissioner of Police, CP Hafiz Mohammed Inuwa, has called for a ceasefire among the warring factions in the community.

This is just as he has ordered a probe into the death of a former vigilante leader, Comrade Tuesday Okuah whose alleged death in police’s custody in Abuja ignited the fresh violence in the community last weekend.

The melee that followed the demise of Okuah led to the destruction of houses and cars in the community as CP Inuwa said that the IGP has ordered a full-scale investigation into the death of the former leader.

With the heavy presence of operatives of the Nigerian Army in the streets of the community, CP Inuwa, while appealing for calm, urged all aggrieved members of the community to sheathe their swords.

He added that the command was working round the clock to unravel the circumstances behind the death of the community Vigilance group’s chairman, just as he assured that the perpetrators would be brought to book.

The Delta State Police boss, who was represented by the Assistant Commissioner of Police, ACP Adamu Lawal Shinkafi and accompanied by DPO ‘A’ Division Ughelli, CSP KEVIN Zuokumor and Executive Chairman Ughelli North, Hon. Godwin Adode said the police was bent at restoring peace that had eluded the community.

On his part, the Ughelli North council boss, who addressed a mammoth crowd at the community, further assured the Evwreni people of Governor Okowa’s concerns about the crisis bedevilling the kingdom in the recent time.

“The State Governor, Senator Ifeanyi Okowa is particular about the problem in Evwreni and he has sent his condolences to the immediate family of the deceased and Evwreni kingdom and Ughelli North Local Government Area as a whole.

“The circumstances surrounding the death of the community vigilance group’s chairman who had hitherto been in the police custody will not be swept under the carpet.

“The state government is working hard to bring a lasting solution to the leadership problem confronting the community in the recent time,” he disclosed.

While condoling the immediate family of the victim, Tuesday Okuah, the Evwreni monarch and Ughelli North council used the occasion to call on all community leaders and well-meaning persons in the council and Delta State, in general, to strive for the unity and development of their communities.

The development late Saturday night snowballed into a major crisis in Evwreni as several houses and vehicles were torched over the reported death of the vigilance group chairman who was arrested some months ago by the tactical team from Abuja.

Some sources had claimed he (Okuah) committed suicide while in detention in Abuja while others had alleged that he was killed by the police in custody.

With the order by the IGP for the probe of the death of Mr Okuah in police custody, peace could then be pursued to a logical conclusion.