No impeachment threat against Ambode ― Tinubu 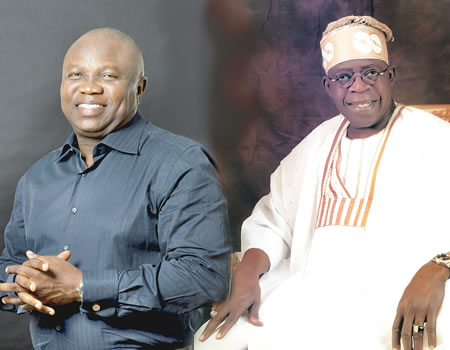 AS Lagosians prepared to witness the appearance of Governor Akinwunmi Ambode on Monday before the State House of Assembly that had summoned him a week ago to do so else he would risk impeachment over delay in presenting 2019, the summon may have been withdrawn following resolution reached at the Governors Advisory Committee (GAC) meeting that held on Sunday at the State House, Marina.

TribuneOnline learnt that the meeting, which just ended at the time of filing this report, had in attendance the National Leader of All Progressives Congress (APC), Asiwaju Bola Ahmed Tinubu; the governor himself, Mr Ambode; his deputy, Dr Idiat Adebule; the Speaker, Hon. Mudashiru Ajayi Obasa, members of the Assembly, various leaders of the party, among others.

According to a source, who spoke on condition of anonymity, the meeting, which was said to have been facilitated by Vice President Yemi Osinbajo through the intervention of Ondo State governor, Arakunrin Rotimi Akeredolu and the Minister of Works, Power and Housing, Mr Babatunde Raji Fashola, was said to have resolved all the grey areas that brought about conflict between Governor Ambode and the State House of Assembly concerning the delayed budget.

The source said following the resolution, the governor would now have the opportunity to present the budget before the House on Tuesday and, therefore, the summoning for him to appear before the plenary on Monday has been now quashed.

Speaking after the end of the parley, APC National leader, Asiwaju Tinubu, admitted truly that a meeting actually took place regarding the conflict between the Executive and the Legislative arms of government in the state, which he noted was of great concern to leaders of the party.

Tinubu’s said the leaders looked into the source of the conflict and applied conflict-resolution mechanisms, available to the party, declaring that there was no impeachment as everything was now resolved amicably.

“We held a meeting on behalf of entire Lagosians. In the last one week or so, there has been some talk about a conflict between the Executive and the Legislature in Lagos. This is of great concern to us. We looked at the source of the conflict, which is normal in a democracy, and that is why there are also conflict-resolution mechanisms.

“We examined the grievances on both sides. As leaders, we also looked into areas where there has to be compromised. In order to build institutions and encourage consensus building, we have to do what is right,” he said.

While declaring that no impeachment process was being moved against Governor Ambode, the APC National Leader, urged for more communication and consensus-building and understanding within the fold, saying these were inbuilt in the democratic system.

“There is no impeachment. Let there be more communication and consensus-building and understanding. All these are inbuilt in the democratic system,” he said.

He, however, expressed his appreciation to Governor Ambode, his deputy, Dr Adebule, the Speaker, Hon Obasa and the leadership of the House, saying all of them had all demonstrated respect for the party leadership in Lagos.

Tinubu expressed joy that the party leadership was able to resolve the conflict and things would now “start moving well and going forward” for the state, declaring: “You know when Lagos sneezes, other areas catch cold.”

“We thank the Speaker and the leadership of the House. We thank the Governor and the Deputy Governor. They have all demonstrated respect for the party leadership in Lagos. You know when Lagos sneezes, other areas catch a cold. We are happy that we are able to resolve the conflict and things will start moving well going forward.”

Also speaking, a member of GAC, Prince Tajudeen Olusi, buttressed what Asiwaju Tinubu had said, declaring: “The APC leader has spoken. This is just to further confirm the decisions that we reached.”

Speaking further, the APC chieftain noted that conflict was an institutional part of the governance, however, said both the Executive and the Legislature must work together.

According to him, “We have reached a decision that they must work together amicably. And very soon, both the Legislature and the Executive must resolve the grey areas in their relationship.”

It would be recalled that not only Governor Ambode was summoned by the 40-member parliament and given a week ultimatum to do so, three of his commissioners were also ordered to appear together with him the same day.

The House had, while giving reasons for the action, accused all of them of spending from the budget which was yet to be presented for passage into law, saying that such action on the part of the executive arm of government was an infraction against all known rule.

Another source, who earlier spoke with our correspondent also on condition of anonymity, had hinted that Governor Ambode would definitely not appear before the House on Monday based on the summon issued by the lawmakers.

The source cited series of consultations that were ongoing in both Abuja and Lagos, disclosing that only on Saturday, the state deputy governor, Dr Idiat Adebule, had a meeting with the leadership and members of the state Assembly, where most of the grey areas of the budget and the conflict were resolved.

“The governor may not have to appear before the House on Monday, I don’t see him doing so because they are already resolving the matter through dialogue.

“You can see that the deputy governor met with the members of the House and the meeting was scheduled to resolve the grey areas which they have covered substantially. The commissioners too, I learnt was at the meeting,” the source said.