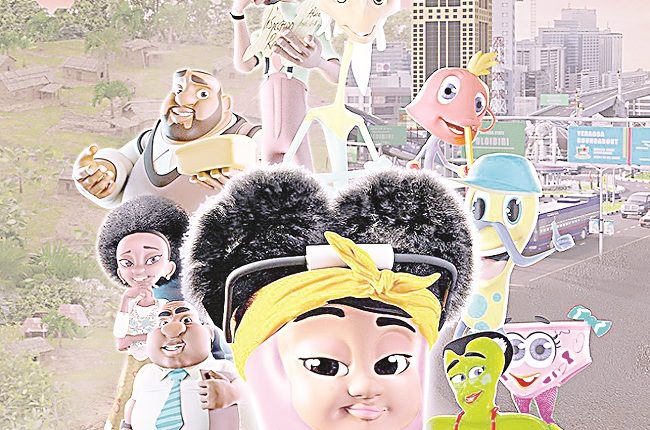 Lady Buckit and the Motley Mopsters (LBMM), Nigeria’s first feature length animation movie, has proved that the future is indeed, very bright for stakeholders in the industry.

For a production that, according to its team, gulped about $1m and many years to bring to life, the animation movie tells a story that encapsulates education, family morals, adventure and has a fair share of humour. And with some funny and unusual names as Lady Buckit, Slipperhead, Pantylegs, Cupsticks, Dustee, and Mopps, the movie, going by the laudatory remarks received across varied cinema audiences, will surely pave way for new realities in an otherwise largely unexplored sector of the entertainment industry.

Lovers of animation will find a delightful time travel story in LBMM. The movie opens to scenes of pre-colonial Oloibiri, the South-South Nigeria town where crude oil was first discovered in commercial quantities in the 1950s. The lead character is Bukky, a happy-go-lucky eight-year-old whose blissful life is abruptly interrupted by major events that will change the course of her destiny. A sad event which she felt responsible for which led to the closure of her parents bakery would make Bukky wish she could turn back the hands of time. The discovery of a mysterious hollow bucket at her neighour’s house would then transport her to the future where she would meet a band of unusual characters and be offered a chance to redeem herself.

As a first attempt, LBMM brings in the fun and entertainment with its characters, voiced by carefully selected entertainers such as Bimbo Akintola, Patrick Doyle, Bola Edwards and Kalu Ikeagwu in the lead roles. LBMM doesn’t also lose its Nigerian flavor, as it is stippled with popular catchphrases in pidgin language.

LBMM, the brainchild of Blessing Amidu’s imaginative mind, was inspired by her children. As the film’s executive producer and producer, she says the movie was brought about to inspire others to greatness.

She said, “Our hope is that families will watch this film together and that the project will be part of helping to build even stronger bonds.”

“2020 has been a daunting year, and as it ends, we must find ways to remind families and friends that there is hope and more joyful moments to look forward to. This is what we want to do with the movie”.

She also hopes the film would encourage “Nigerian creatives to venture into the animation genre of filmmaking in Nigeria.”

“We’ve not had to seek any external expertise whatsoever. Everything is Nigerian, from script to director, cast, crew, animation, and technical team”, she said.

Associate Producer, Oghenero Afrarl said, “We tend to be risk-averse, but I believe this production is a source of inspiration for a lot of Nigerians. They are learning that we can actually do this and I think that there will be a lot of experimentation in animation.”

Chris Ihidero was the Consulting Producer for LBMM and Adebisi Adetayo, the Director and Lead Animator. Adetayo has run Third Academy of Art & Design (32ad), a Lagos-based animation studio that doubles as a training centre and single-handedly assembled the 38 animators that worked on the project.

“I’ve been producing animations for quite some time, though not on a full scale. But when I saw the script, I thought it was beautiful,” Adetayo recalls.

“Every part of it is something I desired very much to bring to life. The storyline is outstanding. Unlike what is expected of a Nigerian animation, this has very unique characters. And that was one of the things that got me very interested in the story,” he said.

Amidu is optimistic that the legacy LBMM is creating will endure. Going forward, she revealed plans to distribute the movie to video streaming platforms and cinema screens in Ghana, Cameroon, and other parts of the world.

Riding on to the exposure LBMM will bring, she looks forward to more success stories in the nation’s entertainment industry.

“We do appreciate the fact that Nigerians have showcased a lot of creativity when you look at the other shorts that have come out. By shorts, I mean in animation. This would be like a pacesetter when it comes to feature-length. We are hoping that going forward, because we’ve been able to do this, every other person will see that it’s actually possible to do this in Nigeria, regardless of the challenges,” she concluded.

‘You need strategic partnerships, visibility and imaging to succeed in entertainment industry’