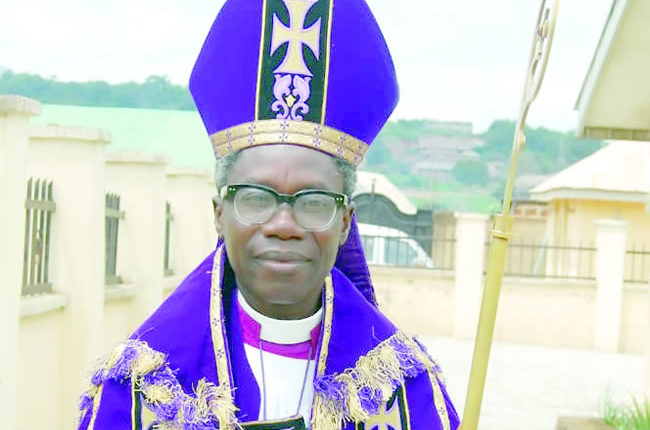 Right Reverend Olugbenga Oduntan is the Bishop of Ajayi Crowther Diocese Church of Nigeria Anglican Communion. In this interview by SEYI SOKOYA, he speaks on burning issues in the country, the raging youth outburst, among others.

THE country is currently boiling following the outburst by the youth against the brutality of the police force, especially the Special Anti-Robbery Squad (SARS) unit, as a cleric what is your take on this?

Sincerely, from my own perspective, the youth came out late because we have no other country. Some of us are already 60 years old and above and we have no other place to go. This is a battle we are supposed to have fought about 30 or 40 years ago so that the youth of today can have a better future. Whatever they are doing now is to secure their future. If they had not come out, the country would continue as before. This is not just against police brutality; I think it should go beyond that, it should get to fighting against bad governance. We know what is happening in other countries. Who is a Nigerian youth? The one that has no future? So, it is a clear warning to show that things cannot continue like this and this is just the beginning.

But some Nigerians also condemn the reaction of the youth, noting that the protest is no longer necessary since the SARS unit has been disbanded. Do you agree with this sir?

They cannot continue protesting anyway, but we need sincerity on the part of the government. Disbanding SARS and changing the name does not remove the character, unless there is sincerity. If the Nigerian youth could see that from the government, they should not just change their name, the change is what we need. If their name is changed or they are deployed to another unit, that doesn’t mean they won’t behave the same way. So, it is the change of attitude that we need from the police, either SARS or politicians. We need a change of attitude; we need to make things right. Nigeria must be a place where we should love to stay and where there will be peace and joy, but it has become a place where nothing is guaranteed.

Do you think the government has responded properly to this development?

As I said earlier, sincerity is what is expected of the government. President Muhammad Buhari has tried by coming out let the youths know that he has listened to them and noted that he has identified with this cause. I think the government should go beyond that. The bad eggs among these people should be dealt with. We are not in the era of unknown soldiers; they know the bad elements among them, so they should be made to face the law. We are in the era of democracy and people should not be brutalised. The state governors and some public officers have  also come out to identify with the youths. If they are sincere, that is good. It will be the first time we will see the government supporting the masses. If they do not arrest this issue now, it may snowball into something we may not be able to handle.

What do you think the Church needs to do at this time?

How has it been as the Bishop of Ajayi Crowther Diocese?

I appreciate God because I see it as a divine assignment. Becoming a Bishop is not by qualification, it is by grace. If the Lord counted me worthy of this type of grace, my attitude to it is that of appreciation. I know it is not easy to head the missionary diocese of that magnitude, but I am grateful to God for giving me the opportunity to serve.  We have more of blessings than challenges because God is there. God’s work done in His way will never lack His support. We started the diocese on a zero level; we started with two priests and we have four local governments to cover, even to the border of the country and in a poverty-stricken area, the system of our church was not feasible. The people were not there, no money, no resources, no structure, those challenges were there, but God is bigger than those challenges. Almost 14 years now, we can look back and say the Lord has marvelously helped us.

You oversee a peculiar terrain that has affinity with the late Ajayi Crowther, who was a prominent person in the vineyard. What have you been able to do to ensure that he is well remembered?

In 2007 when I was elected and enthroned the Bishop of the missionary diocese, my first duty was to recognize his significant role in the growth of the church. Sincerely, I was more than disappointed; the place was just as backward and remote as Ajayi Crowther himself left it in 1821. No sign of civilization, the community itself was nothing to write home about. The challenges were enormous. When I got there, one of the challenges was that the leader of the town, the baale, said: “The Anglican Church abandoned us”. With that utterance, I knew we had something to do for the Lord. We started making efforts until 2018 when the Church of Nigeria listened to us, we presented our proposal, we backed it up with prayers and the immediate past primate supported the idea. It is now transformed; we have finished the first phase of the building. A big retreat centre is named after him, it is going to be Ajayi Crowther Memorial Centre and it is going to be our mission centre where missionaries across the nation will be trained in that community and we will make that place a resource centre for the Anglicans. It will have a full library, a museum and other things. Apart from that, we have synergized with organsiations including the Ajayi Crowther University. We have a campus of the university in Osogun. With these developments, the government is showing interest, everybody is happy with what we are doing. I think in our own little way, this is what we have influenced in the community.

It is obvious that you have spent most of your life in the vineyard, would you say you are fulfilled?

If the end comes now, yes, I am fulfilled. If I still have tomorrow, then there is a better tomorrow. I will be 60 on Friday and my greatest joy is the salvation of my soul. It is the greatest miracle that has ever happened to me. I never knew I could be so much loved by God; I never knew I could be used by God or that I could amount to anything in God’s hand. The day the Lord saved me was the turning point. Every other thing in my life; the ministry is just ‘jara’. It was in 1982 that the story of my life changed, but it wasn’t sporadic. In 1983, I tried to build on the initial contact, and it was then that I knew I needed God. I was actually living a rough life. I was in bad groups and I was going on the fast lane to hell before I had a personal encounter with the Lord.

Would you say that becoming a Bishop is your greatest achievement?

No. Even up till now, I am grateful to God for making me one. But, without it, I prefer to die a Christian. It is possible to be a Bishop and not die a Christian. So, becoming a Christian is the greatest thing. I appreciate God for making me a Bishop, but in all honesty, I appreciate Him the more for saving my life as well as attaining age 60. This is why I have decided to use the celebration to thank God; to take stock of my life and look at the journey. If I have the opportunity to be 70, fine, I will be grateful to God. Sixty is a landmark. It is going to be a double celebration as we will also dedicate our new cathedral; St. Paul’s Oke-Igbagbo, Iseyin, which will be anchored by the Primate of the Anglican Church in Nigeria, Archbishop Henry Ndukuba. Archbishop of our province, Most reverend Segun Okunbadejo, Most Reverend Joseph Akinfenwa, Most Reverend G. L. Olaosebikan and a host of others will grace the event.