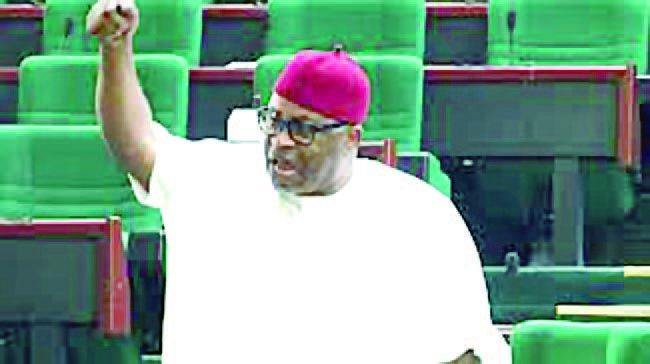 Deputy Minority Leader in the House of Representatives, Honourable Toby Okechukwu, in this interview with KEHINDE AKINTOLA, proffers solution to insecurity, among other challenges facing the country.

NIGERIANS woke up to see long queues at the filling stations across states and the Federal Capital Territory (FCT) Abuja recently. What legislative interventions can you proffer?

I don’t have to talk as an opposition; I don’t also have to talk for Nigerians but I’m speaking as citizen, who is going through the same challenges of the mismanagement of our resources. It was very evident and apparent that the current fuel scarcity has been occasioned by absence of proper measures to fix the refineries; the country has four refineries and none is working. You can’t import yourself to stupor. When you import, it means you cannot control prices. You are just available for the vestiges of the market and once you do not have control of all the factors of production and importation,  it means whatever extraneous elements, including outside forces that come in, you have to be dependent.. That is what we are seeing, and it is such a sad situation and I sympathise with Nigerian workers and we also ask the Ministry of Petroleum and the Minister of Petroleum to make sure it is fixed. One thing is that it (product) is expensive; it is also not available. So it is double jeopardy, and you are not expected to be in government to work that way.

While your party was in government, it could not fix the refineries. How would you relate that to what is happening now?

The Peoples Democratic Party (PDP), while in government, the refineries were working. You can say they were not producing enough. Before former President Olusegun Obasanjo left office, he also tried to privatise the refineries and we were not this exposed. There are alternatives. If Nigerians had not changed the government, there would have been a difference. But we have married a second wife and we now know how it looks like.

Would you say Nigeria is a failed state because of its current multifaceted problems?

Well, there are clear indications that if nothing are done; if we are not careful, we shall be in dire strait. The signs are all over the pace. The state has the monopoly of the instrument of coercion. They are the only ones authorised by law to exercise violence but legitimately. When you see non-state actors take up arms and kidnap  more than 300 children, kidnap 27, accost people on the road and there is no level of intervention that stops that level of criminality, something is wrong. It means they can campaign and canvass for terror anywhere and nothing happens. So, we ought to be on our toes; every Nigerian because everybody has got something to lose. We are not happy it is happening and that is why we have to interrogate our security architecture to the point of being able to make the state government responsible sufficiently for their own security. They will know their citizens. So, the idea of state police is germane and everybody goes for it, including the governor of Kaduna State, Nasir el-Rufai, including other state governors. So, what is stopping us? The executive can actually, in trying to solve this problem, knowing that the thing is overbearing, present an executive bill on State Police that will now make it possible for the chief executive of a state, who is in charge of the security, to be in reality and by statutory flavor, be responsible for security in his state. Not just saying oh, you are the chief security officer; it is just a mere nomenclature, but it is not effective. In reality, it is not possible because the command structure is not there. So, Nigeria is not a failed state yet, but it is failing and we should not allow it to do so. Therefore, if you want to be president, you dress and behave like one; if you want to be a senator, you dress and behave like one. Our expectation is that the government in power and the party in power, should exhibit all the elements of a party that is in power. We are not seeing that yet.