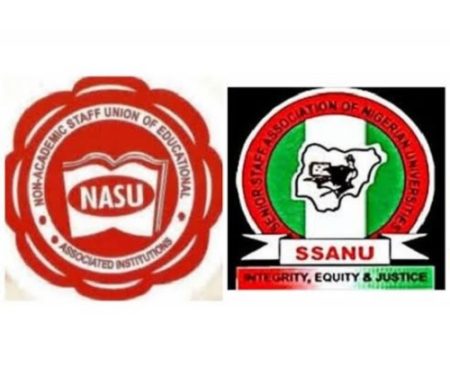 members of Non-Academic Staff Union of Educational and Associated Institutions (NASU) and the Senior Staff Association of Nigerian Universities (SSANU), will begin a three-day protests from today, over the Federal Government failure to implement the agreements reached with the unions in a Memorandum of Understanding (MoU) signed in October last year.

The Joint Action Committees (JAC) of NASU and SSANU, have directed their branches in all university campuses and inter-university centres across the country to embark on a three-day protests, starting today.

In a circular directed to all the branch chairmen, the JAC observed with disappointment that the Federal Government had completely failed to address any of the issues contained in the MoU.

In view of this, JAC directed all the branches to hold a mandatory meeting on Monday (yesterday), to sensitize members on the issues as contained in the MoU, and that, “a three day protests should hold from Tuesday to Thursday at each branch from 8am to 4pm each day.”

The circular, signed by the General Secretary of NASU, Comrade Peters Adeyemi and the SSANU President, Comrade Mohammed Ibrahim, also directed all branches to ensure that all members of the unions fully participate in the protests while all COVID-19 protocols are to be complied with.

The circular stated that the protests marks the beginning of a series of industrial actions to be undertaken by JAC, adding, “you are to await further directives immediately after the three-day protests.”

The issues in contention, according to the circular include: Inconsistencies in the IPPIS payment; non-payment of Earned Allowances (EA); non-payment of arrears of minimum wage; delay in renegotiation of FGN/NASU and SSANU 2009 Agreements; non-payment of retirement benefits of outgone members; teaching staff usurping headships of non-teaching units in clear violation of conditions of service and establishment procedures; neglect and poor funding of state universities; and non-constitution of visitation panels for universities.